I was diagnosed with PCOS in early December 2002, after not have cycles since stopping the combined pill in April. An ultrasound showed I had PCOS. I was also having mild acne, I'd put on some weight and I felt generally sluggish. It turned out I also had an underactive thyroid (diagnosed October), but despite being treated for this my cycles did not reappear, hence the ultrasound.

MY endo recommended metformin but I decided I'd prefer to try the natural approach for 6 months first. I immediately changed my diet, determined to lose the extra pounds, and also to make it more healthy - I followed a VERY strict low GI & organic diet.

I had my hair tested which showed me to be deficient in a number of things including zinc, potassium and chromium so I took some supplements too. I watched out for signs of ovulation... and by the end of January I'd lost 15 pounds and I ovulated and conceived.

Here is a picture of my baby daugther Noa, born on 19th October! 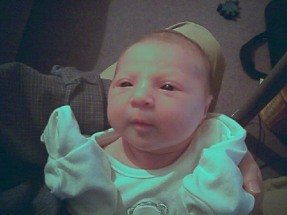 Here was my regime:

We spent most of the first session discussing my symptoms. She suggested a trial run, and only used 4 needles for 15 mins. The needles were so thin that it was not painful at all. We agreed that I would have 5 weekly sessions, and assess at the end of them if I was responding.

After the second session I was sure I had responded. I had 5 sessions in all - and by the 5th at the beginning of February I already had a positive pregnancy test.

I decided to get my hair tested for trace minerals and toxic substances. In the meantime I took supplements.

The advice came back - take zinc supplement to resume ovulation. I embarked on a low sodium diet, using only potassium salt on my food. Cut out tuna fish - the source of the high mercury on my test. Avoided additives, including sweeteners, caffeine, alcohol, filtered water, ate zinc rich foods and took supplements, including EFAs. Incidentally I ovulated 10 days after starting the zinc supplements.

I followed a low GI diet, as many women with PCOS are insulin resistant. The diet in a nutshell involved: no sugar, no artificial additives or refined carbohydrates and making sure that each meal including a good quality protein 25%, unrefined carbohydrates 25% and veggies 50%.

Saturated fats were to be limited but essential fatty acids (EFAs) eaten as often as possible. Fruit was to be eaten in moderation - I avoided the fruit very high in sugar (e.g. melons, mangos) and always ate fruit with protein to balance the insulin effect.

I was very careful in thinking about the effect of what I was eating was doing to my insulin levels and also in controlling calories, and I lost around 15 pounds in 6 weeks. I tried to limit my wheat intake to 10 slices of wholemeal bread a week. I also bought organic food where possible.

I went to the gym 4 times a week, doing very energetic exercise at each session. I was a gym freak before, but when the thyroid and PCOS problems had set in I found it heard to have enough energy to exercise, and struggled to go twice a week.

All this changed when I started the diet - I had loads more energy and really enjoyed my gym sessions. Generally a gym session consisted of around 45-60 minutes cardio machines and 15 mins weights. I also did body balance (combo of pilates and yoga) once a week and I included a swim once a week into my routine too.

I took the following:

An interesting point was that about 2 weeks after the start of my regime I started having little lumps on my arms and legs that indicated that the toxins had left my body. I just exfoliated them all away!

After about 2 weeks I already had great improvements in my symptoms.

After a further 2 weeks I had ovulated and I found out 2 weeks later that I had conceived.