Inflammation, PCOS, and Your Weight

Contrary to what you may think, body fat in PCOS women is not simply an inert storehouse of unused calories encasing your body and organs.

Actually, your fat cells are metabolically very active and are intimately involved with your symptoms and problems. For example, they produce hormones (such as estrogen) and other signaling molecules that have far-reaching effects throughout your body.

The signals that are sent and received by your fat cells will influence how much fat you retain and how easy or difficult it will be for you to lose weight. Some of these signals are created as the result of inflammation.

A number of studies indicate that PCOS women who are overweight tend to be in a state of chronic inflammation.

Even adolescents with PCOS symptoms of high insulin and testosterone have elevated white blood counts, suggesting that the immune system is aroused and an inflammatory process may be occurring.  The white blood count is elevated even more when birth control pills are taken.

Chronic inflammation appears to play an under-recognized but central role in the pathology of PCOS and obesity. 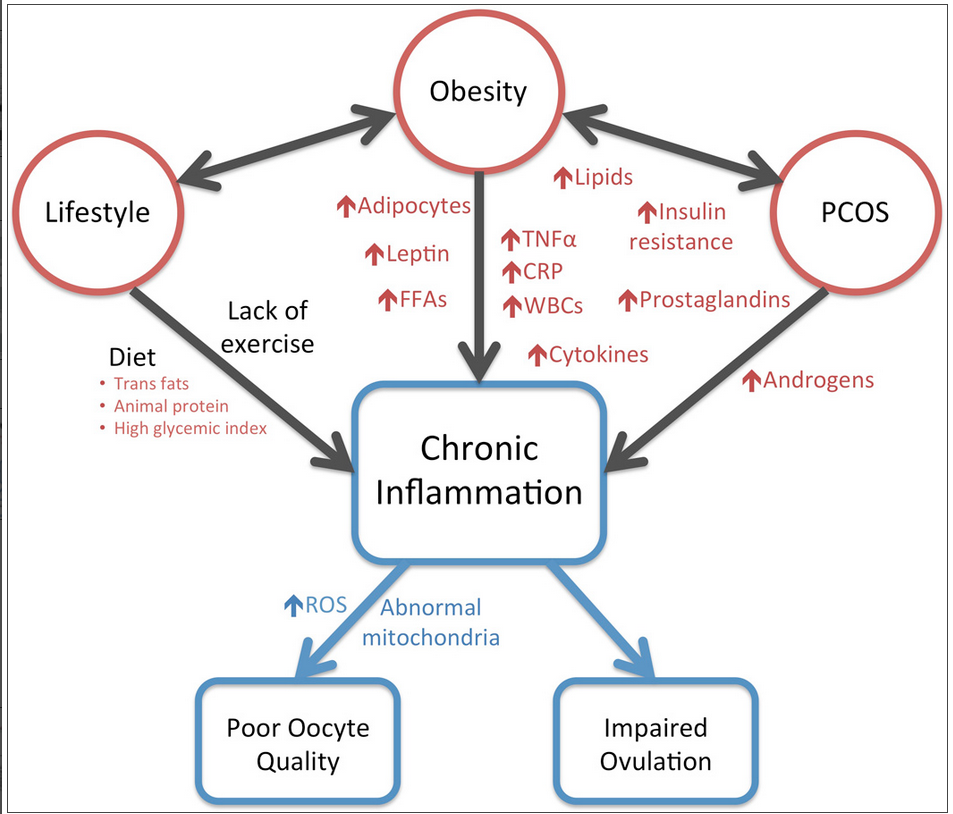 Inflammation and PCOS Are Closely Linked 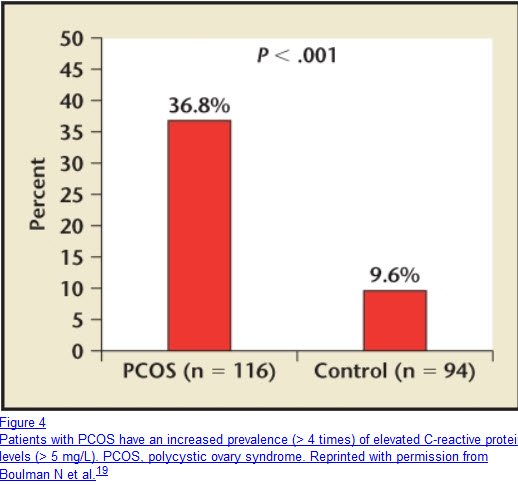 C-reactive protein (CRP) is a protein that is a general indicator of inflammation and is associated with being overweight. CRP is a fairly common blood test that you can get from your doctor. A high level of CRP is a strong predictor of future cardiovascular disease and stroke.

Researchers involved in the Nurses Health Study have discovered a dietary pattern that is very closely related to the degree of inflammation and the incidence of diabetes.

As you know, PCOS has an inflammatory component that worsens your symptoms and substantially increases the risk of developing diabetes.

The study revealed that women whose diet was high in sugar-sweetened soft drinks, refined grains, diet soft drinks, and processed meat had much higher levels of inflammation and incidence of diabetes. In fact, the women with the highest consumption of these foods were 2.5 times as likely to develop diabetes compared to women who had the lowest consumption of these items. The women with the most inflammation and diabetes also ate fewer vegetables.

If you're still consuming soft drinks, refined grains and processed meat, it's time for you to stop and think. It's well-known that if you have PCOS, you already have a much higher risk of getting diabetes than other women. By eating these foods, you're only making matters worse. We urge you to improve your diet immediately.

This study explains why we do not include these foods in The Natural Diet Solution to PCOS and Infertility e-book…and why we stress the importance of eating more vegetables.

Inflammation is not always as obvious as pain or swelling. It can occur at a low, unnoticeable level. This is referred to as sub-clinical, chronic inflammation. In other words, the inflammatory biochemical process is occurring, but you are not aware of it. Chronic, low-grade inflammation is what we are concerned about in dealing with PCOS and weight problems.

You can think of your fat cells as an endocrine and secretory organ, just like your ovaries, thyroid, adrenal glands, liver, hypothalamus, or any other organ or gland in your body.  Fat cells produce a bewildering array of biochemicals that influence what goes on in your body.

One family of biochemicals produced by your fat cells are "cytokines", many of which are involved in the inflammatory process. They include leptin, adiponectin, tumor necrosis factor alpha (TNF-alpha), interleukin-6 (IL-6), to name a few. Most cytokines promote inflammation while some others inhibit inflammation.

The more fat cells you have, especially around your middle, the more cytokines you will produce and the more likely it is that you are promoting inflammation.

Your fat cells increase inflammation in another way, by attracting a type of white blood cell known as a macrophage, which produces inflammatory cytokines.   Macrophages are scavenger cells. Their job is literally to gobble up foreign organisms and cellular debris.

Macrophages seem to be drawn to body fat because fat cells tend to leak and break open, especially in people with abdominal obesity. Macrophages move into the leaky fat tissue in order to clean up debris and then they themselves begin to release inflammatory factors. Macrophages appear to be a major contributor to inflammation.

To limit the damage produced by inflammation, your body produces anti-inflammatory biochemicals that are triggered by the inflammation itself. This is a compensating mechanism that attempts to maintain a balance in the healing process.

When pro-inflammatory cytokines enter a cell to initiate or promote a biochemical processes to increase the inflammatory response, the cell simultaneously produces anti-inflammatory chemicals called "suppressors of cytokine signaling", or simply "SOCS". SOCS molecules suppress the cell's response to inflammatory cytokines. Two SOCS molecules, SOCS-1 and SOCS-3, are able to interfere with a cell's ability to respond to leptin, which increases leptin resistance.  SOCS-3 also blocks the response to insulin, which increases insulin resistance.

Some researchers believe that SOCS production is an important cause of leptin resistance and consequently contributes to the development of obesity.

Some with PCOS May Have a Problem with Resistin

Fat cells and macrophages (a type of white blood cell) produce a hormone called resistin.  Resistin appears to cause tissues -- especially the liver -- to be less sensitive to the action of insulin and thus lead to increased blood sugar levels. There is a strong association between elevated levels of resistin and obesity and diabetes.

Resistin is a potent stimulator of inflammation.   In experiments, increased levels of resistin also appear to induce increased SOCS-3.(18) As we said, SOCS-3 contributes to leptin resistance and insulin resistance.

The amount of body fat you have may also increase resistin. While resistin in produced by fat cells, it is also produced by the macrophages that are attracted to debris leaking from fat cells. Increased macrophage activity could lead to more resistin.

Although resistin levels are not elevated in all PCOS women, these women appear to be more inclined to produce resistin than those without PCOS.