I'm a little hesitant to talk about any PCOS topic that could be quite concerning to some people.  But after thinking about it, my feeling is that it's better to know something than remain unaware.

The topic has to do with attention deficit hyperactivity disorder (ADHD) and autism spectrum disorder (ASD).  You may have noticed that these somewhat related disorders have been gradually increasing over the past few decades.

If you're an adult and don't have either of these problems, you don't have much to worry about.  Rather, the concern is about your future children, if you have PCOS and plan to start a family.

A couple of scientific research papers have come out recently to suggest that the children of women with PCOS have substantially higher rates of ADHD and ASD than do the children of other mothers.  Obesity in the mother was found to be an additional risk for ASD in the offspring.

Is Fetal Programming the Problem?

The mechanism causing the disorders appears to be altered fetal programming, where various factors combine to change how the fetal brain, nervous system, organs, immune system, and other tissues develop as the fetus is growing.

Brain development is especially sensitive to environmental factors that influence the formation of brain regions and neurological processes, including the reward system, motor function, and spatial memory, which are impaired in ADHD.

These alterations can manifest themselves at any time from childhood to adulthood.  For example, PCOS itself is thought by some researchers to be caused by altered fetal programming - but may not become obvious until the teen years.

So what would be some of the factors causing future ADHD and ASD in the fetus?  Or PCOS for that matter?

A primary cause is thought to be excessively high levels of male hormones or other hormonal imbalances in the mother, which are passed along to the developing fetus.  So if you're planning to conceive, it would be a good idea to get your hormone levels checked by your doctor.

For example, if your testosterone and insulin levels are abnormally high, you can look into ways to naturally bring these hormones back into balance.  Diet, exercise, metformin and selected nutritional supplements would help you in this effort.

Another cause of increased ADHD or ASD risk is maternal obesity and insulin resistance.  Even a mild decrease in fat weight will help.

A major but hidden factor in altered fetal programming are environmental hormone disrupters that a mother is exposed to every day.  It's hard to deal with these because we can't see, taste or smell most of them.  It's suspected that at more than 100 of these disrupters could be associated with autism.

Just do the best you can to be aware of your environment and protect yourself while pregnant.  Eat organic foods and avoid processed foods.  Drink filtered water.  Keep your house clean.  Don't be around new furniture, new construction or new carpets in your home, which exude volatile chemicals.  Check the contents of all cosmetics and household products.  Don't used pesticides or herbicides in your garden.  Check to see if your furniture, bed or other products contain flame retardants.  If you live in a smoggy city or downwind from a major highway, consider moving to another location.  And so on.

Another environmental chemical worth noting is glyphosate (found in RoundUp).  It's found in corn, soy and wheat.  If pregnant, think about moderating your intake of these foods, or look for substitutes or organic sources. 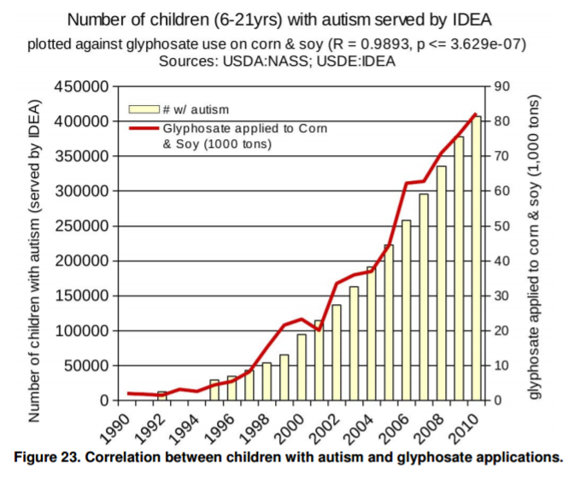 Close Correlation between Autism and Glycosate in RoundUp

In conclusion, it's possible to reduce or even eliminate the risk of ADHD, ASD or PCOS in your future son or daughter.  It's just takes careful attention to detail and consistent action toward a healthier body and environment.

None of us will ever live in a perfect, non-polluted world.  But we can "give our best effort" to improve our lot in life.  That's what I tell myself every day.  If we can give our best effort towards improving our health, then we can live without regrets, no matter what the future may bring.