The "Darth Vader" of Chemicals in Your Food -- and a Partial Cause of PCOS?

We suggest you start by removing all foods in your diet that might contain the weed killer "Roundup".

Roundup has our vote as the potential Darth Vader in your foods for several reasons.

First, there appears to be a significant correlation between the use of Roundup and 22 chronic diseases

Several studies have identified Roundup or its components as disruptors of hormone function, including hormones you're concerned about such as estrogen and progesterone. Not only could Roundup contribute to your hormonal problems and PCOS, it might also increase your risk of breast cancer.

There is also some evidence that it may cause birth abnormalities. I recommend you carefully avoid exposure to Roundup if you are pregnant.

The Institute of Biology at the University of Caen in France recently tested 9 different pesticides and herbicides. They said: "Despite its reputation, Roundup was by far the most toxic among the herbicides and insecticides tested."

We don't have room here to go into more details. Watch this video to better understand how Roundup is affecting your health.

How GMO Crops Help Roundup Get into Your Body

OK, so it appears Roundup is pretty unhealthy. But that's not all. It's also the mostly widely used herbicide used on food crops in the world. Back in 2008, 620,000 tons of Roundup was produced. I'm not sure how much is being manufactured today, but I'm sure it's a lot more than 620,000 tons.

Since Roundup was introduced in the 1970s, its use has increased every year. But why has it increased? The main reason for the increase is the advent of "Roundup Ready" GMO (genetically modified crops), predominantly soy and corn. Almost all the soy and corn you eat has been treated with Roundup. It is also used on GMO crops that produce cottonseed and canola oils. It is used to some extent when wheat is harvested. It is used on GMO sugar beets, the primary source of table sugar.

But here's the catch. In order to be effective, Roundup must penetrate into the plant. So Roundup is formulated for optimal penetration. It penetrates into the weeds, and into the crop you are going to eat. So there's no way it can be washed off.

But wait a sec. We've all been told that GMO crops are essentially the same as non-GMO, and that they're totally safe. Surely, Monsanto and giant food corporations must be telling us the full truth. And government agencies are doing an impeccable job in protecting our health. Right?

Well, we wish it were true. But it isn't. 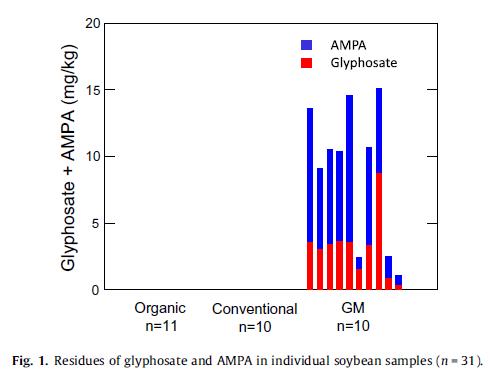 You Must Remove GMO and Pesticide-Laden Foods from Your Diet

Here's the bottom line. What you eat isn't just a matter of calories. Or nutrition. It's also a matter of contamination with poisons. All of these factors will affect your outcome with PCOS.

We recommend you follow a diet along the lines described in The Natural Diet Solution for PCOS and Infertility e-book, which does not have any soy, corn, wheat or table sugar. Keep in mind that 95% of our soy and corn is GMO, and that Roundup is also sprayed on some wheat crops during harvest. So if you're consuming a lot of processed and packaged foods, chances are you're also getting your daily dose of Roundup as well as other chemicals, pesticides and fungicides.

We hope you will do what you can to seek out organic or local foods that are more likely to be free of contaminants.

It's sad that nearly all government agencies are not as vigilant as they should be. But I did notice one bright spot.

Voters in California passed an initiative called Proposition 65. I found this out because just today I received a nutritional supplement that I had ordered online. An extra label was on the container that said: "California Proposition 65 WARNING: This product contains lead, a chemical known to the State of California to cause birth defects or other reproductive harm." I was dismayed but glad to have the information. Thank goodness the manufacturer was required to have that label! And guess what? I'll think twice before buying this brand of product again. We consumers urgently need to have more honest and accurate labeling on every food, beverage or supplement product we purchase.

You Are Carrying a Body Burden of Man-made Chemicals Inside Your Body.

Were You "Programmed" to Develop Polycystic Ovary Syndrome?