Will Your Baby Get PCOS?

Do you ever wonder whether your children -- or child not yet born -- could develop PCOS or some other disorder? If you're trying to conceive or are lucky enough to have had a baby or two, perhaps this thought has crossed your mind.

It's not a trivial question! Just imagine your daughter going through all the difficulties you have been going through. It would be heart-breaking for both of you.

So is it possible to avoid this risk, or is it genetically determined that your daughter will have PCOS? Or your son will have weight problems or develop diabetes?

The good news is that just because you have PCOS, your daughter will not necessarily develop PCOS. However, there is an increased risk that she will.

This is because of a concept called "fetal programming" or "developmental programming". It's a physiological process that can create different results from the same genetic background. 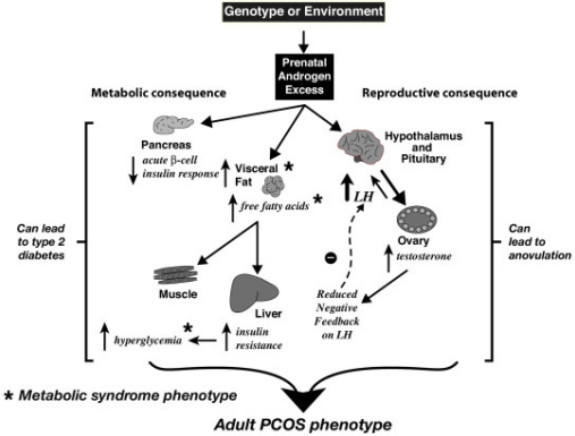 The purpose of the programming is to help a developing human to adapt to its expected environment.

This programming starts from the moment of conception and continues until you become an adult. The most important phase is during your time in your mother's womb. The effects of this programming are maintained throughout your life.

In other words, what goes on from conception until your child becomes an adult will affect her or him for the rest of her life. Moreover, the children of your children may also be affected.

Here's a classic example of what I mean.

The infants of pregnant women who experienced the Dutch Hunger Winter weighed less than expected when the mother was undernourished during the third trimester. As adults, these children were more susceptible to diabetes, obesity, cardiovascular disease and other health problems.

It was recently reported that individuals who were prenatally exposed to the Dutch famine still have, six decades later, an altered metabolism compared to their unexposed, same-sex siblings.

In addition, this effect was passed on to the infants in the second generation from those who were exposed to the famine.

The Dutch famine was one of the first clues to indicate that early-life environmental conditions can cause changes in humans that persist throughout life -- and possibly beyond into future generations.

Since then, there have been hundreds of medical research studies to indicate that during early development, we are all very sensitive and respond to everything in our environment, whether in our mother's womb, or as a young child or even an adolescent. This is true for all mammals.

Take the common meadow vole for example. The thickness of the coat of a fetal vole is determined by signals from its mother as to how much daylight there is, which indicates the season. If the days are short, the coat is thicker. This adaptation aids survival.

Bottom line: The environment you provide for your developing fetus and child will deeply influence whether or not she develops PCOS-related health problems.

Of course, the environment you create will affect you, too! Even though you may be past the age of developmental programming, there's still a lot that you can do to improve your health outcomes.

OK, so what should you do now?

I've had a pretty good look at 100 or so medical studies on this topic. It appears there are two things that will help you the most to optimize developmental programming for your future children, and to reduce the adverse consequences of your own programming:

Yes, it's a big job to deal with these two issues. But well worth the effort. Besides your own health, consider the health of your developing baby or child. To a large extent, their future is in your hands.

The chemical issue is especially nettlesome and has profound effects. I'll have to save that for future newsletters.

Many of the diet issues are dealt with in The Natural Diet Solution for PCOS and Infertility e-book. This diet minimizes your exposure to substances in your food supply that can contribute to adverse developmental programming.

If you think diet quality doesn't make any difference, take a look at these mice. 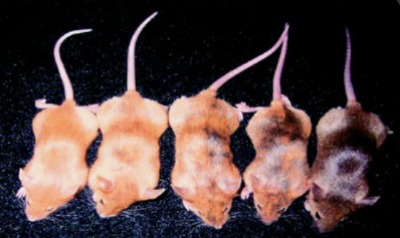 According to their genes, all of them are supposed to have yellow fur. But they don't. That's because the mothers of some of these mice were given vitamins with their food while others were not. The vitamins in the mother caused the fur to darken in the offspring (mice on the right). This is an example of fetal programming.

Here's another example, shown below. They are two mouse fetuses. The mother of the smaller one on the left was fed a high fat diet. The other was not. Can you see how diet composition of the mother can affect fetal growth?