Normalization of Your Cycle 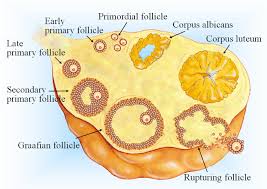 A number of studies have established a role for calcium in egg maturation and normal follicular development.

Vitamin D plays a crucial role in calcium absorption and regulation. A study conducted at Columbia University investigated whether vitamin D and calcium dysregulation contribute to the development of follicular arrest in women with PCOS, resulting in reproductive and menstrual dysfunction.

They studied 13 women who had chronic lack of ovulation, hyperandrogenism (excessively high male hormones) and vitamin D insufficiency. Nine had abnormal pelvic sonograms with multiple ovarian follicular cysts.  All were hirsute, two had hair loss, and five had acanthosis nigricans.

Vitamin D combined with calcium supplementation resulted in normalized menstrual cycles within 2 months for seven women. Two became pregnant and the others maintained normal menstrual cycles. These data suggest that abnormalities in calcium balance may be responsible, in part, for the arrested follicular development in women with polycystic ovarian syndrome and may contribute to the pathogenesis of the disorder.

Shahid Sedughi University in Iran released a study of 100 infertile women with PCOS who were all taking 1,500 mg. of metformin.

The women were divided into two groups. One group took calcium 1000 mg/day and vitamin D 100,000 IU/month for six months. (IU = international units). The other group did not take any supplements.

So what happened by the end of six months? In the vitamin D and calcium group, body mass index improved, menstrual regularity increased, follicle maturation improved and fertility improved more than in the group who took nothing.

At the beginning of the study, an amazing 83% of the PCOS patients showed vitamin D deficiency, with 35% severely deficient. By the end of the study, 74% of these women had adequate vitamin D levels.

This study affirms earlier evidence that vitamin D adequacy is very helpful for improved fertility and for reducing most your other symptoms. This is why so much vitamin D is included in the d-Pinitol formula.

Regarding pregnancy, higher vitamin D levels were associated with reduced gestational diabetes, fewer C-sections, and reduction of preterm births, according to a study from Hospital Clinico San Carlos-IdISSC in Spain.

Two other recent studies have shown that vitamin D deficiency may be a contributing factor to insulin resistance and diabetes, both of which are problems for women with PCOS and contribute to ovarian dysfunction and absence of a normal cycle. These and other studies suggest that vitamin D plays a supportive role in the secretion, and possibly the action, of insulin.  People with diabetes tend to have lower vitamin D levels.

The best place to get your vitamins and minerals is from your diet. However, diet is not enough. Our diet today is insufficient in some vitamins and minerals. Secondly, the presence of polycystic ovarian syndrome may increase your needs for certain nutrients, such as vitamin D, calcium, or inositol. So you'll want to take a look at supplementation.