Your PCOS Diet Plan Can Include Brown Rice

Some of you have a copy of The Natural Diet Solution for PCOS and Infertility.   It's a diet intended to help you control PCOS.

But it’s a strict diet that can be hard to follow, even though many have reported good results with it.

One of the biggest problems with this diet is that it takes away nearly all of your grains and legumes, including rice, corn, soy, and gluten grains like wheat.  What you're left with is a diet that has similarities to various Paleo diets.  Not a lot of fun for those of us who enjoy our carbs!

Well, here's some relief from this grain restriction.

This diet book does not adequately discuss the pros and cons of rice.  It's clear that refined white rice and instant rice should be avoided because of its high glycemic index and empty calories.  But research since the book was written clearly shows that brown and other colored rice offers some interesting benefits that shouldn't be ignored.

Beneficial Types of Rice for PCOS

In short, the following types of rice appear to be OK to consume: 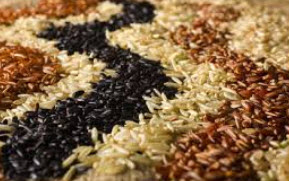 So you can take the recipes in the diet book and modify them a bit to include modest amounts of colored or germinated rice.  Doing so should make some of the meals more palatable, especially if you have a hankering for grains.

What Does the Research Say?

OK, so what does the research say about rice?

Isfahan University of Medical Sciences in Iran recently published a study of overweight women.  The women consumed the same diet except that one group ate 150 grams of brown rice for six weeks while the other group ate white rice.  Then, after a two week hiatus, the groups switched, with the brown rice group eating white rice and vice versa.

The result?  When the women were consuming brown rice instead of white rice, their weight went down, their waists got smaller, their blood pressure dropped, and they had less inflammation.  The white rice offered no benefits at all.

Whole brown rice is loaded with a bunch of important nutrients, such as vitamins, magnesium and other minerals, fiber, essential fatty acids, gamma-oryzanol and gamma-aminobutyric acid (GABA).

These nutrients benefit the body in numerous ways.

Take magnesium for example.  It's needed for more than 300 biochemical reactions in your body.  It also helps to reduce insulin resistance.  And, studies have suggested that women with PCOS are lower than other women in this critical nutrient.  In this Iranian study, magnesium levels where higher when the women were eating brown rice instead of white.

Reduce Your Risk of Diabetes

The Harvard School of Public Health has estimated that replacing white rice with brown rice could reduce your risk of developing diabetes by as much as 16%.  Diabetes is a common outcome of having PCOS, so this information is relevant to you.

However, there is substantial resistance to brown rice in cultures where white rice is prevalent.  In one study of Chinese, they considered brown rice inferior to white rice in terms of taste and quality, until they tasted brown rice.  However, after tasting brown rice and learning about its nutritional value, the majority indicated greater willingness to consume brown rice.

The main barriers to acceptance were the perception of rough texture and unpalatable taste, as well as higher price.

If you're eating white rice now, why not switch to brown rice and see what you think. Maybe you'll like it!

Endoplasmic Reticulum Stress Is a Problem for PCOS Women

The fiber and other substance in brown rice help to promote beneficial bacteria in your gut.  An imbalance of gut bacteria has been associated with obesity, PCOS and a variety of other disorders.

And, animal studies conducted at the University of the Ryukyus in Japan and elsewhere suggest that brown rice reduces "endoplasmic reticulum" (ER) stress.  It's a tongue-twister -- but very important.

The ER is a sub-unit of most of your cells.  It synthesizes and folds protein into certain molecular patterns.  But when this process goes awry because of advanced glycation or other problems, proteins can be misfolded or become unfolded.  This is called ER stress.  If the ER stress is not relieved, the impaired function of the cell could cause it to die.

Interestingly, components of brown rice (such as gamma-oryzanol) have been shown to reduce ER stress, especially in the hypothalamus gland inside your brain.  One of the jobs of your hypothalamus is to help regulate your appetite and feelings of satiety.

ER stress impairs the ability of the hypothalamus to regulate your food intake and energy levels.  It contributes to inflammation, insulin resistance, and leptin resistance in this vitally important gland.  It also can cause you to prefer eating fatty foods.

Remember, dysregulation of the hypothalamus is a big problem in PCOS.

Have You Heard of "Germinated Brown Rice"?  May Be Good for PCOS

Bottom line?  If you're going to eat a grain, brown (or red or black) rice is a good choice.  Germinated brown rice may be especially helpful for PCOS.  Colored rice and germinated rice is available in some grocery stores.  Also, brown rice components such as gamma-oryzanol, rice bran oil or rice bran are supplemental items to consider.

And by the way, fermented brown rice has anti-cancer properties as shown in lab animal experiments, even in pancreatic cancer, which is virtually incurable.

Some of you eat a lot of white rice, while others don't. Does it make any difference?

The fact is that what you eat has a huge impact on polycystic ovary syndrome. Rice is one example.

This is relevant to you because diabetes and PCOS have a common root cause, namely insulin resistance. So, if white rice increases the risk of diabetes, it's logical to think that the same is true of PCOS.

The reason that white rice is a problem is that it's a refined carbohydrate. In contrast, brown, black, red, or purple rice is unrefined.

Refined carbohydrates cause your blood sugar and insulin hormone to go out of whack. As a result, all kinds of metabolic processes in your body are disturbed.  In addition, this disturbance throws your other hormones out of balance.

No matter whether you are lean or overweight, any refined carbohydrate won't help you to control and minimize polycystic ovary syndrome. In fact, these carbs take your further away from a solution.

If you habitually eat white rice, we strongly recommend that you switch to brown or other colored rice instead as a start.

We also propose that you phase out all refined grains. If your symptoms don't improve, consider removing all grains from your diet.