When you think about which PCOS diet is best for you, you will also want to take your blood type into consideration. You can easily determine your blood type by asking your doctor for a blood test.

Peter D'Adamo, ND, has developed the concept that the proteins with make up your blood-type will interact with lectins, which are found in foods. When this interaction occurs, cell damage can be the result.

This concept is quite complex, but basically it means that people with certain blood types are better off when they avoid certain foods. 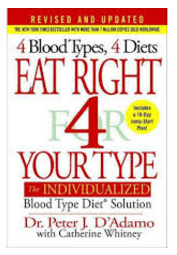 This is the original human blood type, and probably arises from the ancient hunter-gatherer type of diet.

Blood type O people have a strong immune system, which means they are likely to have a strong reaction to things the immune system does not like. This could show up as allergies, GI symptoms, hay fever or chronic inflammatory conditions such as arthritis.

Type O people also have strong digestive systems, so they are good with hard-to-digest foods such as proteins.

But since the advent of modern agriculture, out diet has drastically changed. The foods produced by modern agriculture are not the foods that blood type O people have traditionally been consuming and thus they develop health problems.

Blood group A has evolved with the development of agriculture over the last 10,000 years or so.

This group doesn't do as well with red meat although poultry and fish is OK.

They do better than Type O with vegetables, fruits, grains and beans (legumes).

Blood group B became apparent among nomadic herder societies somewhat later than types O and A.

Because a lot of their food came from their herds, they have a good capacity to consume dairy products particular cultured dairy like yogurt and cheese.

They appear to do well with fish, eggs and poultry with the exception of chicken.

Their digestive capacity is not as strong as type O. Dietary variety and smaller meals are appropriate for this group.

Blood group AB is the most recent. It appears to have developed as the result of the introduction of the 'modern' diet.

People in this category have elements of both group A and group B. They seem to do relatively well with a diet of seafood, vegetables, and grains. Small quantities of dairy also OK.

On the other hand, red meat, chicken, and nightshades such as potatoes and tomatoes may cause health problems. Some beans and grains may also be a problem.

Since their digestion is less powerful than Type O people, smaller meals with lots of variety is recommended.

It's well known that PCOS has an inflammatory component and possible immune disorders as well. Therefore, it may be a good idea when dealing with polycystic ovary syndrome to modify your diet according to your blood type.

For more details, read one of Dr. D'Adamo's books to learn more about his Eat Right for Your Type Diet.

What's a Good Diet?
Why You Should Avoid Convenience Foods
Which Carbs Are Best?
The Dangers of GMO Foods
The Benefits of Juicing
You Need Antioxidants
Click here for a Natural PCOS Diet Plan e-book