Progesterone and PCOS - Why this Hormone Is Important

Even if you don't have PCOS, the progesterone hormone is really important.

It's a hormone that affects every tissue in your body, including the uterus, cervix, vagina, the endocrine (hormonal) system, brain cells, fat metabolism, thyroid hormone function, water balance, peripheral nerve myelin sheath synthesis, bone cells, energy production and thermogenesis, the immune system, survival and development of the embryo, and growth and development of the fetus. Though referred to as a sex hormone, it conveys no specific secondary sex characteristics.

This hormone is essential for life because it is a precursor to aldosterone and cortisol, which are essential for life. It is a precursor to all the steroid hormones, including estrogens and testosterone. Its chief function is to synergize the actions of estradiol in the female organs, especially in pregnancy. It is necessary for proper uterine and breast development and function.

It is formed primarily by the cyclical rupture of an ovarian follicle (corpus luteum), and secondarily in the adrenal cortex. It is also produced in the placenta in large quantities during pregnancy. 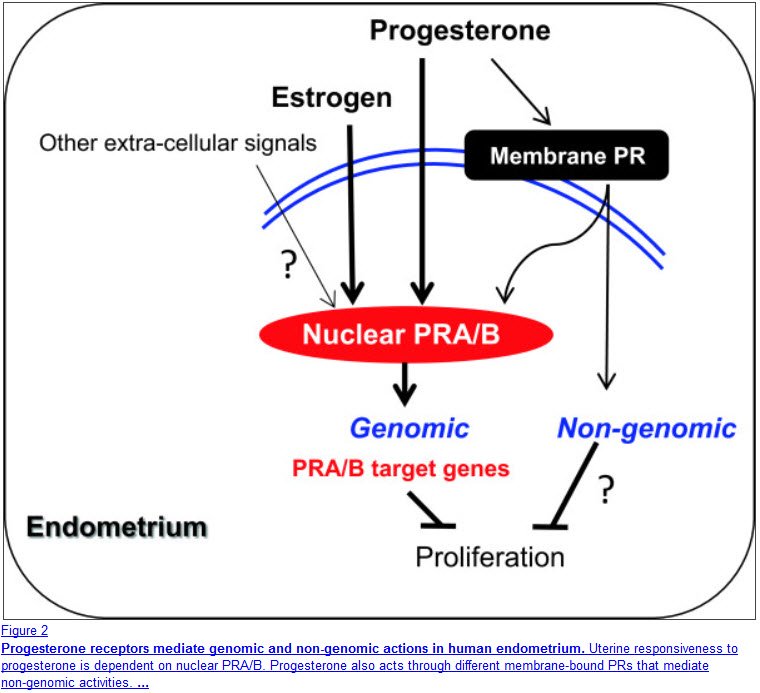 Production is high during the luteal phase (second portion) of the menstrual cycle and is low during the follicular phase (first portion), as well as being low before puberty and after menopause.

The possible reasons for low levels of this hormone in polycystic ovary syndrome are varied and complex. Here are some factors to consider:

PCOS may occur when a woman doesn't ovulate, which causes a disruption in the normal, cyclical interrelationship among her hormones, brain and ovaries.

Normally, the hypothalamus, a regulatory center in the brain, monitors the hormone output of the ovaries and synchronizes the normal menstrual cycle. When monthly bleeding ends, the hypothalamus secretes gonadotropin-releasing hormone (GnRH), which stimulates the pituitary gland in the brain to release follicle stimulating hormone (FSH) and luteinizing hormone (LH). These hormones direct an ovary to start making estrogen (mostly estradiol), and stimulate the maturation of eggs in about 120 follicles.

The first follicle that ovulates, releasing its egg into the fallopian tube for a journey to the uterus, quickly changes into the corpus luteum, which is a factory for making progesterone, and raises its concentrations to 200 to 300 times higher than that of estradiol. This huge surge of progesterone simultaneously puts the uterine lining in its secretory or ripening phase, and turns off further ovulation by either ovary.

If fertilization does not occur, the ovary stops its elevated production of both estrogen and progesterone. The sudden fall in the concentrations of these hormones causes shedding of the blood-rich uterine lining and bleeding (menstruation). Then, in response to low hormone levels, there is a rise in GnRH and the cycle starts all over again.

But what happens to this cycle if, for some reason, ovulation is unsuccessful? For example, if the follicle migrates to the outside of the ovary, but does not "pop" the egg and release it, the follicle becomes a cyst, and the normal progesterone surge does not occur.

The lack of progesterone is detected by the hypothalamus, which continues to try to stimulate the ovary by increasing its production of GnRH, which increases the pituitary production of FSH and LH. This stimulates the ovary to make more estrogen and androgens, which stimulates more follicles toward ovulation.

If these additional follicles are also unable to produce a matured ovum or make progesterone, the menstrual cycle is dominated by increased estrogen and androgen production without progesterone. This is the fundamental abnormality that creates PCOS.

Some physicians recommend supplementation of normal physiologic doses of progesterone to treat PCOS. If progesterone levels rise each month during the luteal phase of the cycle, as they are supposed to do, the normal menstrual pattern is maintained each month, and PCOS is less likely to occur.

Natural progesterone is a logical component of polycystic ovarian syndrome treatment, along with stress reduction, exercise, nutrition, and nutritional supplementation.

Taking this hormone while ignoring your diet and lifestyle may yield disappointing results. Regular exercise, healthy diet and stress management are essential for success.

When you are under chronic physical or emotional stress, a stress hormone called cortisol is produced by your adrenal glands. Cortisol and progesterone compete for common receptors in your cells. Therefore, cortisol impairs progesterone activity, which reduces the effectiveness of progesterone therapy or may lead to a condition called "estrogen dominance."

High cortisol also causes an increase in your blood sugar level, which may in turn cause an over-production of insulin. High insulin levels may lead to insulin resistance and production of androgens (male hormones) and thus worsen PCOS symptoms.