If you have purchased The Natural Diet Solution for PCOS e-book, you may have been put off by the recommendations to eat organic, grass-fed meats or wild game instead of the ordinary supermarket meat or processed meats we all eat every day. Even worse, there are no dairy products in the recommended diet.

Are the authors out of their minds, or what? Why would they be so strict and impractical?

The main problem is fat. Fat is what makes meat so delicious and easy to chew.

But -- fat is where the body stores toxins. That's true for humans. And for animals.

So when you eat the fat of animals, you also eat the toxins they have stored. These toxins end up in YOUR fat cells, where they are stored indefinitely.

Grass-fed livestock and wild game is much lower in fat than animals fattened up in feed lots and pens.

Dioxins Are Bad News for Endometriosis and Maybe PCOS

Let's take dioxins for example. "Dioxins" is a label applied to a large family of chemicals. Perhaps the most well-known dioxin is Agent Orange, used to defoliate the jungles in the Vietnam war. Dioxins are everywhere in our environment. They get stored in fat cells and remain there for a very, very long time.

They have been linked to all kinds of diseases, including cancer, thyroid disease, immune disorders, diabetes, endometriosis and nervous system damage.

So what about PCOS? Is there any connection between dioxins and PCOS?

Consider one of the dioxins called TCDD, which is possibly the most toxic of the dioxins. TCDD is a pervasive chemical that is a known hormone and immune system disrupter. The ingestion of contaminated food is the primary source of TCDD exposure. TCDD accumulates within the human body, especially in areas of fat storage; it has an estimated half-life in humans of 11.5 years.

For these reasons, TCDD is a significant contaminant in the human breast. Breast milk samples have been found to contain very high levels of this compound, even in populations from poorly developed regions, reflecting the widespread transfer of dioxins and other toxicants from their point of origin. Very high levels of TCDD have been reported in breast milk in Belgium women, a country noted to have one of the highest incidences of endometriosis.

A number of medical studies have demonstrated that exposure to TCDD can induce endometriosis. The evidence suggests that TCDD interferes with the progesterone communication system in your tissues.

Thus, progesterone cannot regulate your body as it is supposed to. This is referred to as "progesterone resistance".

In addition, TCDD is known to disrupt ovarian progesterone production.

Your inability to produce and utilize progesterone is a primary reason why you have problems having a normal cycle and are less likely to become pregnant.

But this is not the end of the TCDD story. In mice, TCDD has been shown to affect future generations. Embryonic mice and young mice exposed to TCDD appear to have progesterone resistance that carries on for several future generations. The same could turn out to be true for humans.

Progesterone resistance appears to be clearly linked to endometriosis. There is also some evidence that this hormone disorder occurs in PCOS.

Here's the bottom line: Environmental chemicals like TCDD are screwing up your hormones. If your hormones are screwed up, then you have PCOS and a whole bunch of other health problems.

How to Get Dioxins Out of Your Diet

OK, let's get back to the diet. As we said, a lot of these chemicals are in the foods you're eating, especially in animal fats.

For most of us, the diet is a major source of these toxins. See the chart below, which indicates where your total dioxin load is coming from. 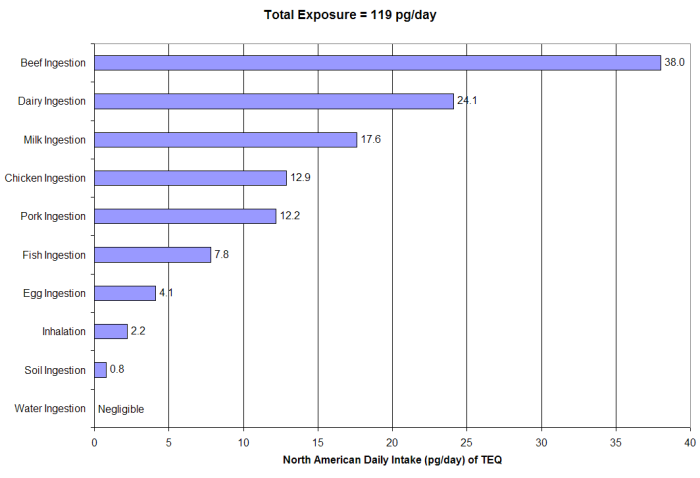 As you can see, beef and dairy are the highest sources.

One purpose of The Natural Diet Solution ebook is to reduce your exposure to all dioxins. Dioxins are proven to mess up your hormones. That's why the authors were so picky about what they recommend.

Regardless of the diet suggestions in the ebook, do what you can to reduce consumption of land animal fats.

In summary, dioxins and other hormone disrupting environmental chemicals have been implicated in polycystic ovary syndrome, insulin resistance, fatty liver disease, dysfunction of female sex hormone action, and much more.