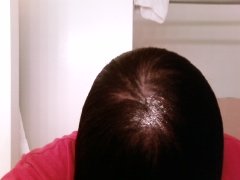 (This is Part 3 of a story continued from part two of LenaMarie's story).

Over the years my diabetes wasn’t under control and I learned what a yeast infection felt like.

I never had one before so I don't know if it’s the same as a yeast infection in a woman that isn't a diabetic but I think it’s the worst. It wouldn't go away and I didn't like how my doc was dealing with it.

When I went to see a GYN I was told it was just a yeast infection that spread...it was bad, really, really, bad. I was given some meds and it only worked for a few weeks. So I had to keep going thru this for a long time.

I didn't want to have sex or anything it was way too painful. After I would think the yeast infection is gone I would have sex and it would hurt really badly. I got little cuts in my groin area and in the folds of my labia.

It was all bad to a young couple with no children and really wants to have some.

After seeing another GYN I found out I have Lichen Sclerosus. I just can't get a break.

The doctor told me that it is normally misdiagnosed in African American women because you can’t really notice the pigment change. If I understand it right it’s when my skin gets thick and rip easy or something.

I was told I would have to deal with this my whole life, but I caught it early. She was saying how some women go their life without telling anyone and it can lead to Cancer of the Vulva.

She said to be sure she would have to do a biopsy of that little bridge between your vagina opening and your anus...she also had to take a biopsy form the inside of my leg (where your panties go in the upper part of your thigh).

Last year I just wanted to fight back and do something because I was getting nowhere fast.

I started to go to the gym and workout with a trainer. I was doing great feeling good and everything.

At the start of my workout I went to the doc to have my blood tests done. I have insurance now so I’m trying to get on a good track to get better.

I went to see a new GYN because it was just becoming too much to deal with. I was told I just had a really bad diabetic yeast infection (my husband NEVER got it either).

She told me to take a pill and do the medication I had to put inside and on the outside for a week. I called and told her it wasn’t gone and I repeated the process. I thought she was a life saver because it was gone, really gone.

Editor's comments: Lichen sclerosus is thought to be an autoimmune disorder, where the immune system is confused and attacks various parts of the body. Thyroid disease is also associated with this condition. It's not uncommon for women to have an autoimmune thyroid disease called Hashimoto's disease, where the immune system attacks the thyroid gland, rendering it ineffective. Lack of optimal thyroid function leads to all sorts of problems such as weight gain, infertility, hair loss, etc.

One way to deal with an autoimmune condition is to improve the quality of your diet and thus hopefully reduce the dietary antigens that might trigger an immune response. For example, some clinicians think that gluten (found in wheat, barley and rye) may be implicated in autoimmune disease. Therefore, eliminating foods containing gluten is something to consider.