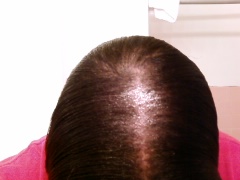 (This is Part 2 of a story continued from part one of Lenamarie's story).

I first found out about PCOS from a friend at work. I was just feeling really bad one day and telling her my issues.

She suggested to me have a talk with my doctor about PCOS. While my doctor's office I had to text my friend about what is was called that I needed to talk to her about. When I was asking her about PCOS she was like "Yea, I know what Polycystic Ovary Syndrome is".

My boyfriend of 4 years (Now my husband) was with me and you should have seen his face. He looked like he wanted to slap her.

I couldn't believe she knew what it was and never said anything to me about it before. Like most low income people, I had no medical care. I was on a low income grant from the hospital because I had found out a few months earlier I had diabetes.

I just couldn't believe she know all this time about it and didn't mention it to me. I had been going to this hospital for years because of their low income programs and willingness to work with you.

My doctor didn't even really do anything. I asked for an ultrasound and some tests to be done and she said it wasn't necessary.

All she said is, I see slight hair on your face and you have been having period problems since age 16. That was enough information she needed to diagnose me, but why didn't she say something when I was 16?

I talked to my friend and I wasn't into looking for help on the web so I didn't know much about it. My friends said to go back and have her give me an ultrasound anyway.....I did.

After my ultrasound they said I had one ovary slightly bigger than the other but it was still in a normal range so they said my ovaries are fine.

You would think the doctor would put me on some meds so my periods would get regular.

We told her that my boyfriend and I were trying to have a baby and she still didn't do anything to help. I wanted to kick her in her head...I just felt so hopeless and she was acting like this wasn't that big of a probable.

I had a mole on the back of my neck and I was combing my hair and basically ripped it. She sent me to a dermatologist to get it check out. When I was there I didn't spend too much time on it though. I wanted to talk about my hair loss.

Because I am African American they didn't see any real hair loss so they didn't do much to fix it either.

I went back a month later and pressed my hair out so they could see it and they started to believe me.

I got a biopsy done and was told I had female pattern baldness and was starting to be in the beginning stages of scaring alopecia. They also said they saw some staph infection in the little bumps I had in my head.

You can't even know what I was feeling at that time. I’m an African American young woman with no hair, diabetes, and PCOS.

I couldn't take anymore; I felt like I was going to die. You would think they would all put it together and put me on some meds to get me better. You know what they did: NOTHING.

Editor's comments: You mentioned hair loss and alopecia. "Androgenic alopecia" is surprisingly common among women who have PCOS or diabetes. It is caused partly by an excess of male hormones. We will be publishing a special report on hair loss soon, which will help to shed some light on this very troubling health problem.

Meanwhile, we provide some information on our Hair Loss web page.