PCOS Is a Chicken-and-Egg Riddle

PCOS is a chicken-and-egg sort of thing.  Which came first -- the chicken or the egg?  And which chicken laid which egg?

We have many dozens if not hundreds of internal processes and signaling molecules interacting with each other and influencing each other in such a way that you end up with symptoms of PCOS.

In addition, we have exposure to a huge but unknown number of external factors such as modern foods and environmental chemical pollution, all of which affect our internal processes in some way.

Finally -- and importantly -- we have our genetic inheritance that was altered while we were still an unborn fetus.

Of all of these factors and processes, which ones change other ones?  Which ones cause PCOS, either directly or indirectly?  And which ones reduce it?

Is It Insulin Resistance or Is It Obesity? 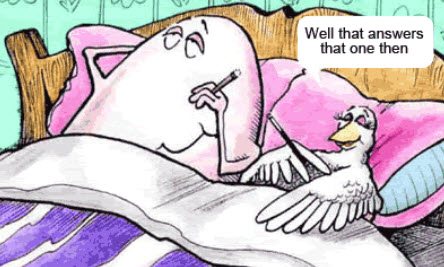 But it's not as simple as that.  As an example, a lot of lean women with PCOS have insulin resistance, yet they are not obese.  So what's up with that?  If it were true that insulin resistance causes you to become fat, why isn't every PCOSer fat?

Well, the answer is really complicated.  We could talk for next 10 days about the literally hundreds of other chicken-and-egg questions that would need to also be answered, since they all affect both insulin resistance and obesity in some direct or indirect way.

The fact is, there is a whole hen house full of different chickens and eggs.  It's no wonder the average doctor doesn't really understand this disorder.  And it's no surprise that you may feel confused and frustrated.

Your Hyper-Sensitive Immune System and PCOS

So let's just boil it down and introduce one additional but extremely important factor:  your immune system and inflammation.  But immunity and inflammation itself is a huge topic.

Research has shown that both lean and overweight PCOSers have hyper-sensitive MNCs.  One of the things they are really sensitive to is glucose (blood sugar).  When MNCs sense high levels of glucose, they go a little berserk and release pro-inflammatory chemicals and signals that result in a condition call "oxidative stress".

And oxidative stress in PCOS has been linked to insulin dysfunction (insulin resistance), excessively high levels of insulin, and higher levels of male hormones (testosterone).

Moreover, oxidative stress in your ovaries has been shown to cause them to increase production of male hormones, which you don't want to happen.

Beta cells in your pancreas gland secrete the hormone insulin, which is critical for regulating blood sugar and overall energy management in your body.  Maintaining the health of your pancreas is vital because if it becomes exhausted, insufficient insulin is produced and you end up with diabetes.

Those hyper-sensitive MNCs we were talking about are found throughout the body, including your pancreas.  Interesting research from the Cleveland Clinic and elsewhere is suggesting that MNCs in your pancreas can create oxidative stress that appears to impair the function of your insulin-producing beta cells.  In other words, it appears that chronic oxidative stress (inflammation) can disturb your insulin balance.

You may be wondering what causes your MNCs to be so sensitive.  That's a story for another time, which would involve a discussion of male hormones and your weight.

But for now, the take-away is that PCOS is an inflammatory state, regardless of whether you are lean or heavy.  And secondly, this inflammation affects tissues in different ways.  In the ovaries for example, it appears to cause them to produce more male hormones.  Inflammation is involved in every single symptom you have.

What You Need to Do

So your #1 job is to figure out how to minimize inflammation.  Here are just 2 quick ideas out of dozens of things you could do.

1)  Watch your diet like a hawk.  Avoid processed foods that force an increase in your blood glucose.  Eat whole foods instead.

2)  Have a look at supportive nutritional supplements, such as the d-pinitol formula, which could help to protect your pancreas and other tissues.  There's an inflammatory activation pathway called "nuclear factor-kB".  D-pinitol has been shown to inhibit nuclear factor-kB and thus it is an anti-inflammatory substance, in addition to other benefits.

Whew!  Congrats on getting this far.  That was a tough read!  We wish polycystic ovary syndrome were simple.  But it isn't.