For the majority of women with polycystic ovary syndrome, a primary cause of symptoms is the presence of a medical condition called "insulin resistance". Insulin resistance simply means your cells are "resistant" to or are under-responding to the hormone insulin. Therefore, insulin cannot efficiently tell the cells to store blood sugar or perform a multitude of other tasks. The result is that the entire body is thrown into a state of imbalance and distress, leading to weight gain, belly fat, ovulation problems, mood disorders, and skin and hair issues.

You Have PCOS -- But How Do You Know You Have Insulin Resistance?

A doctor can get a pretty good idea by looking at you, your medical history and blood test results. For example, if you have a lot of abdominal fat, darkened skin patches, high blood fats, high blood pressure, high blood sugar levels, and a family history of diabetes, one might presume you have insulin resistance. But that's a presumption. It would be nice if you could make health decisions based on more than just a presumption.

It's important to know whether you have insulin resistance because if it's left unidentified and untreated, the long-term consequences will be disastrous for your health. You could end up with diabetes, heart disease, cancer, Alzheimer's or any other degenerative disease.

Lab testing can be helpful in identifying whether or not you have insulin resistance. Let's review the tests you might consider.

The lab tests you're most likely to encounter are fasting glucose, glucose tolerance test, fasting insulin and hemoglobin A1C tests. They are briefly discussed here. All of them are helpful, but not as informative as the glucose tolerance/insulin response test.

All of the above blood tests provide informative data points upon which to make a judgment of whether you have insulin resistance -- or not. But none of them are discriminating or diagnostic of insulin resistance.

A newer test has come along, called the GTIR. I imagine you have never heard of it. And maybe your doctor hasn't heard of it either. The concept of the GTIR is based on the work of Joseph Kraft, MD, who published a very interesting article: "Detection of Diabetes Mellitus In Situ (Occult Diabetes)".


Essentially, Dr. Kraft discovered that the vast majority of patients with a "normal" OGTT test (oral glucose tolerance test) result actually had the beginnings of insulin resistance. He called this "diabetes in situ", a term he adopted "because it embodies the concept of disease detection at its earliest identifiable point".

The GTIR is based on a classic OGTT, with measurements made at baseline (fasting) and at multiple points after a glucose solution is consumed. At each point both glucose and insulin are measured.
The results are graphed and the insulin response is classified according to five patterns. These patterns describe a progression of insulin response from completely normal (Pattern I) to pancreatic islet cell exhaustion (diabetes) (Pattern V). 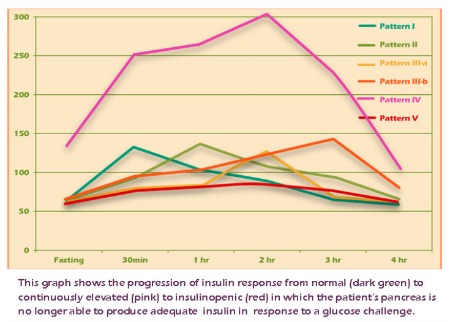 The GTIR presents each Pattern in a distinct graphical format so that you can quickly see what your pattern is and determine what should be done about it.

Even better, at least one laboratory (Meridian Valley Laboratory in Washington state) now offers a finger-stick version of the GTIR test so that you don't have to go through the inconvenience of having multiple blood draws. This lab also offers the same test with a regular blood draw.

If you have PCOS, I strongly recommend you ask your doctor for a GTIR test. It may uncover a hidden problem that you can solve and thus get healthier and feel better -- sooner than you think!

Here's an example of the GTIR for early detection and treatment.

"GJ is a 38 year old woman who came into our clinic in February with a chief complaint of easy weight gain and fatigue. She is 54" tall and weighed 174 pounds at the initial visit. BMI was 29.9. Her pulse and respirations were normal and her BP was 107/76. She had a history of gestational diabetes and a family history of Type II diabetes. Fasting blood sugar was elevated at 111, but HgbA1c was only 5.3. Because of the family and personal history, a 4-hour Glucose Tolerance/Insulin Resistance test was run. On the GTIR test, fasting and 2 hour glucose were 83 and 113, respectively, both well within the limits of normal based on American Diabetes Association criteria. Fasting insulin was above 10 (11.80) and peaked in the 2nd hour at 93.20. This is a Pattern IV insulin response."

"GJ was put on berberine, 500mg 3 times a day, and counseled about diet and exercise. She was highly motivated because of her Pattern IV GTIR result. At her six month follow-up visit she had lost 9 pounds and her BMI had decreased to 28.3. Her Hgb A1c was also improved at 5.1. Her GTIR test demonstrated a dramatic reversal from the original Pattern IV result to a completely normal Pattern I result."