Abnormalities of blood sugar (serum glucose) and insulin are quite common in PCOS. There are several rather common blood tests to assess blood sugar status and the possibility of insulin resistance.

The tests listed below are important because 50% - 80% of women with PCOS may have some degree of insulin resistance. Insulin resistance is thought to be one of the root causes of polycystic ovarian syndrome.

Your first step is to consult with your physician as to which lab tests are most appropriate for you.

If any of the tests below indicate that you have a problem with high blood sugar or insulin resistance, what can you do?

Below are the tests you should review with your doctor.

Click here to learn about the most effective blood test for insulin resistance.   This test will help you to identify a problem earlier so that you can stop it.

A healthy fasting glucose level is between 70-90, but up to 110 is within normal limits. "Normal" is what is expected, not what is "healthy". Any "normal" test result is not necessarily an "optimal" or "healthy" test result.

Note:  A couple of things can go wrong when testing your fasting blood glucose levels.

First, it's possible you had your blood drawn too soon after eating a meal or consuming a beverage, which has the effect of raising your blood glucose level. Thus, you would have an elevation because you recently ate something, not because you may have a diabetic problem. Hopefully, if your fasting glucose was high, your doctor asked you if you had anything to eat or drink prior to the blood draw.

Second, and more important, is a fact that your doctor may not know about. According to a study in the Journal of the American Medical Association, as many as 50% of people with undiagnosed diabetes may show "normal" results on an afternoon fasting glucose test. In other words, your fasting glucose level in the afternoon is naturally lower than in the morning. So if you had your blood drawn in the afternoon, your blood glucose level might be "normal" whereas a morning test would show your glucose level to be "high".

Researchers discovered that the afternoon test missed twice as many people with diabetes and nearly three times as many people with impaired fasting glucose compared to the morning test. Even a 2-hour shift in testing time may cause an inaccurate "normal" result in a person with blood sugar problems. The implication is this: If you had your blood drawn in the afternoon, and your fasting glucose was "normal" or at the high end of "normal", your blood sugar may actually be higher than you or your doctor think.

Normally, your blood glucose levels increase modestly after you eat carbohydrate foods. This increase causes your pancreas to release insulin so that your blood glucose levels do not get too high. However, some women with PCOS tend to have chronically high levels of insulin that do not drop back to normal levels. This is a condition called hyperinsulinism and has negative health consequences.

Fasting insulin measures insulin between meals, when it should be at its lowest.

However, a "normal" fasting insulin level below 10 does not necessarily mean you don't have insulin resistance. Keep in mind that a fasting insulin test is only a snapshot at one moment in time, and it needs to be compared to your blood sugar levels.

The ratio of fasting glucose to fasting insulin may also provide insights. A glucose to insulin ratio of less than 4.5 is suggestive of insulin resistance.

This test is useful because red blood cells have a life span of around 120 days. So the Hemoglobin A1C test can reveal the average blood sugar levels over the past 3-4 months.

While the fasting glucose test is like a snapshot in time, the hemoglobin A1C is like a movie of your blood sugar level over a 3-4 month span.

Your HbA1C should be under 6% to show good blood sugar control. A chronically elevated HbA1C not only puts your health at risk, but it also is associated with increased infertility and indicates a relatively unfavorable environment for a successful pregnancy.

By the way, glycated hemoglobin" is glucose that has combined with a blood cell protein, and represents an unhealthy process. The combining of glucose with proteins results in toxic substances called glycosylation end-products, or "AGEs". Elevated levels of AGEs indicate that a degenerative process is underway.

The AGE reaction is not reversible, and AGEs accumulate over the lifetime of a protein. Your goal is to prevent AGEs from forming in the first place, by modifying diet, lifestyle, and other factors to promote healthy blood sugar control.

This is a simple and fairly inexpensive test. We recommend it. 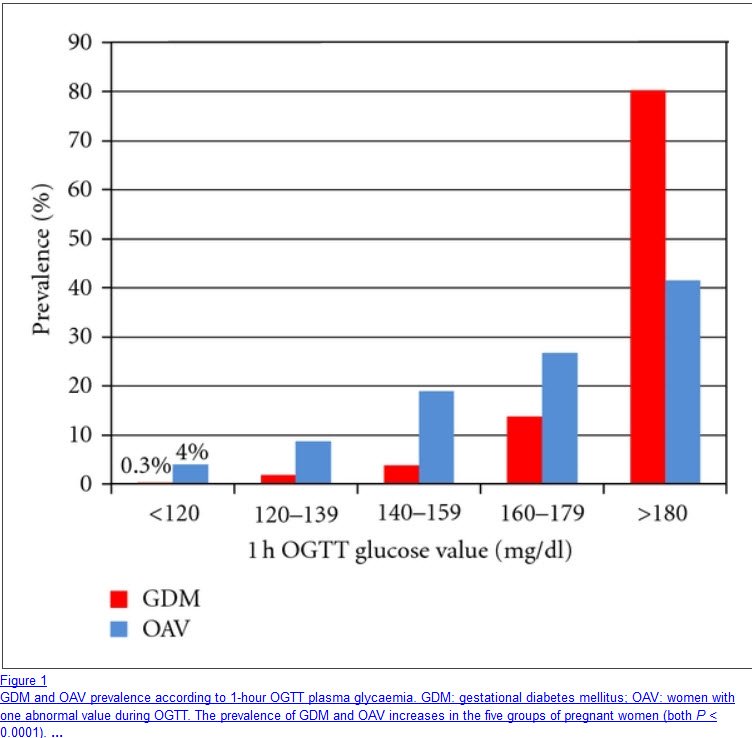 The oral glucose tolerance test (OGTT or GTT ) assesses your ability to handle a load of sugar (glucose). An abnormal test result in PCOS women may suggest the presence of diabetes or a pre-diabetic condition. Abnormal findings may also indicate other problems such as reactive hypoglycemia.

The OGTT is time-consuming and inconvenient, although it is handy for seeing how your body responds to ingested glucose.

Currently recommended is a simplified and standardized OGTT, consisting of a baseline (fasting) blood draw, and then another blood draw 2 hours after consuming 75grams of glucose. This test is more informative than the fasting glucose test. But one problem with the standard OGTT is that you could have both a normal fasting and 2-hour blood sugar but still have an elevated insulin level, which suggests that it takes too much insulin to maintain normal blood sugar levels. This pattern hints at possible insulin resistance.

The OGTT may also be used to check pregnant women for gestational diabetes. When done for this purpose, the test is called a glucose challenge screening test, and it is usually done during the 24th to the 28th week of pregnancy.

You may have an increased chance of developing gestational diabetes if you:

The OGTT consists of drinking a small amount of glucose solution and measuring the blood glucose values every hour to get a curve. The form of the curve tells a lot about the body's sugar metabolism. The test may last several hours.

A combination of the above lab tests may be more informative for diagnosing PCOS-related insulin problems than one test alone.