What You Need to Know about Fish Oil

Fish oil contains fatty acids EPA and DHA that are critical for healthy function, fluidity and health of cell membranes. EPA/DHA is also converted by the body into "good eicosanoids", which are very powerful hormone-like substances that prevent inflammation and a host of other potential health problems. Deficiencies of EPA/DHA are associated with abnormal development and dozens of chronic health problems. 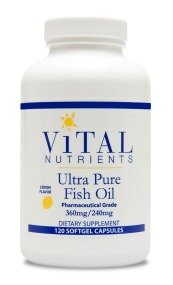 EPA/DHA can be created in your body from a precursor fatty acid called alpha linolenic acid (ALA), which is found in some nuts, seeds, vegetables and animal foods. You can also get some EPA/DHA directly from your diet, especially from fish. ALA and EPA/DJA are members of the "omega-3" group of fatty acids. (A "fatty acid" is a basic building block of fats and oils).

However, most Americans do not consume nearly enough ALA or EPA/DHA in their diet.

The oil in flax is called alpha linolenic acid (ALA). It must go through a metabolic transformation before it is converted into final omega-3 fatty acids called EPA and DHA. This transformation is controlled by an enzyme called delta-6-desaturase (D6D).

There are many factors that inhibit the performance of the D6D enzyme and thus reduce the conversion of alpha linolenic acid (ALA) into EPA/DHA.

Among the D6D inhibitors are elevated cholesterol, caffeine or alcohol consumption, saturated fat or trans-fat consumption, vitamin and mineral deficiencies, and hormonal abnormalities, including stress hormones, insulin resistance, and hypothyroidism. Women with PCOS and infertility typically have some of the factors at play, possibly resulting in impaired D6D activity. The consequence is that needed EPA and DHA is not created in sufficient quantities.

Fish oil solves this problem. This oil already contains EPA/DHA. So when you consume fish oil, you don't have to worry about how well your D6D enzyme is working. You have completely bypassed that metabolic bottleneck by ingesting your EPA/DHA instead of having to create it yourself.

In some individuals, this oil may be a lot more effective than flax seed oil.

We explain fats, fatty acids and eicosanoids in great detail in this healthy PCOS Diet e-book.

What Are Good Dietary Sources of EPA and DHA?

Oil Supplements - Which One?

If your diet is not rich in cold-water ocean fish, you may need to take a supplement containing oils from fish or other marine animals.

Cod liver oil can have a fishy taste and might cause belching, nosebleeds, halitosis, or heartburn in some people. Gastrointestinal side effects can be minimized if cod liver oil is taken with meals and if doses are started low and gradually increased.

EPA/DHA fish oil capsules. People who are concerned about their caloric intake may prefer to take EPA/DHA capsules, which has the same benefit as cod liver oil, but is much more concentrated and has far fewer fat calories. Moreover, if fish oil is disagreeable to you, you can take less of it and get the same effect by taking EPA/DHA capsules.

EPA/DHA capsules also do not contain vitamins A and D.  If you're one of those rare people who needs to be concerned about accumulating too much vitamin D or A, then EPA/DHA capsules are preferred over cod liver oil