Are you familiar with saw palmetto extract? And how it might benefit you?

It comes from a reddish brown-to-black berry growing on a small palm tree. The fruit of this palm (Serenoa repens) has been part of the diet of natives of the southeastern U.S. for hundreds of years.

Men have used it for decades to reduce prostate gland problems, which are caused in part by an excess of a male hormone called dihydrotestosterone or DHT.

You may have heard that an excess of male hormones is a cause of PCOS symptoms, such as infertility, hirsutism, hair loss, acne and other troubles. 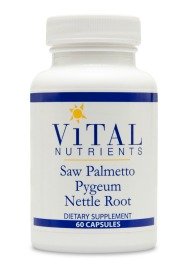 That's why your doctor prescribed "anti-androgen" birth control pills. "Androgen" is the medical term for male hormones such as testosterone and DHT.

So where does DHT come from? DHT is created from testosterone by the action of certain enzymes in your body called "5-alpha reductase".

Since you have PCOS, it's very likely you have more testosterone than other women. But that's not all.

It's a Double Whammy!

First, you have too much testosterone to begin with.

A recent study at the University of Birmingham in the UK showed that both overweight and normal-weight women with PCOS had higher 5-alpha-reductase activity than women who did not have PCOS.

And thus you produce a lot more DHT than other women do. All this DHT gives you symptoms that others don't have.

This is where saw palmetto extract enters the picture. It appears to do three very helpful things:

In summary, it inhibits DHT. That's what you want to do. You want to keep your DHT production under control.

Another benefit of saw palmetto is that is has anti-inflammatory properties. (Subtle chronic inflammation is a problem with most women who have PCOS).

"Thank you so much for selling the Saw Palmetto-Pygeum-Nettle Root extract. I've been on 4 medications in the past for PCOS that never had an effect except for making me feel bad. I've been losing my hair for the past few years, despite not even being 30 yet, and it was very noticeable at my hair part.

After using the extract for 2 months, my once sparse hair part has visibly improved! There's also a lot less hair falling out on my hairbrush than there used to be!"

Get High Quality Saw Palmetto from our PCOS Supplements Store

Useful for Hirsutism or Hair Loss?

Palmetto extract could help with the following PCOS symptoms:

A reason for these problems is that DHT is a highly active hormone in the skin area, affecting hair follicles on the face, scalp and elsewhere.  Other males hormones may be involved as well, such as testosterone, androstenedione, and DHEA.

Is It Similar to Anti-Androgenic Drugs?

Spironolactone is a diuretic that blocks two pathways to the production of androgens, or male hormones. One of those pathways is inhibition of 5-alpha-reductase. Spironolactone may cause irregular bleeding in some women, as well as nausea, indigestion or fatigue.

Propecia and Proscar inhibit 5-alpha-reductase and are used mostly for male pattern baldness and men with enlarged prostate glands.

The Journal of the American Medical Association published a review of studies that concluded saw palmetto was as effective as finasteride in the treatment of enlarged prostates.

Two advantages of saw palmetto are:

A number of herbal products and nutritional supplements work synergistically to modify your hormonal profile. A few examples include vitex (chasteberry), saw palmetto, stinging nettles and pygeum. You may wish to combine saw palmetto extract, stinging nettle root and pygeum for a greater effect. You may also wish to add vitex.

Pygeum africanum is an evergreen tree found in the higher elevations of Africa. The fatty acids in pygeum appear to have effects similar to those found in saw palmetto. Pygeum contains substances that have been reported to work synergistically to:

Side Effects and Precautions

No significant side effects have been noted in clinical trials with this herbal extract, except for rare headache or stomach upset if taken on an empty stomach.

Check with your doctor before taking it if you're pregnant or breast feeding.

Palmetto berry constituents have alpha-adrenergic blocking activity that may alter the effects of these medications: prazosin, terazosin, doxazosin mesylate, tamsulosin.  It may have an additive effect if taken with anti-androgen drugs that reduce the levels of male sex hormones, such as finasteride (Prosca, Propecia) or flutamide (Eulexin).  If you're taking any of these drugs, check with your health practitioner before taking saw palmetto.

How Much Should You Take?

Every woman is unique, so the amount and form of saw palmetto you need won't be the same as for someone else.

As a general guideline, a common dose for men is 320 mg. of extract per day, standardized to at least 85-95% fatty acids with a guaranteed minimum of 0.2-0.4% sterols. ("Standardized" means you get the same amount of active ingredients every time). You may decide to start with a somewhat lower dose.

In men, it can be taken for six weeks before any effect is noticed. If improvement is noted, it is recommended that men take it continuously. Since you're trying to reduce DHT like the men are, you could do the same.

As you can imagine, a supplement program can get complicated.  Therefore, we recommend you seek guidance from a naturopathic doctor or other qualified health professional.

WARNING: The quality of botanical supplements varies widely. Don't buy any herbal or botanical product unless it has a "standardized" amount of the active component listed on the label. A "standardized" product has a consistent amount of active ingredients from one bottle to the next. If you buy a product that is not standardized, you have no clue as to what you are actually getting and may be wasting your money.

You can obtain the highest quality palmetto or vitex extract products from our PCOS Supplements Store.