Is Your PCOS Complicated by "Wilson's Syndrome"?

If you have troubling symptoms of PCOS, you might have a chronic condition that appears to be a form of hypothyroidism.  An array of vague hypothyroid symptoms combined with stress and low body temperature is referred to by some health professionals as "Wilson's Syndrome" or "Wilson's Temperature Syndrome", named after Denis Wilson, M.D., who first brought it to our attention.

Typically, a person with Wilson's would have these characteristics:

The problem is that most doctors think that Wilson's does not exist.  In other words, if the typical thyroid lab tests come back as "normal", there is no proof of thyroid hormone dysfunction.  And therefore, the symptom complaints are "all in your head", or are simply unexplained.

So what's missing here?  Could it be that doctors don't test for reverse T3?

Interestingly, one doctor I know told me that research indicates that about 29% of people with low thyroid are detected only by a high rT3.  In other words, nearly 1/3 of people with hypothyroidism are undiagnosed by doctors because they did not run a complete thyroid profile, which would include rT3.

The Role of Reverse T3

Under normal conditions, a thyroid hormone called "T4" is converted by your tissues into the biologically active form called "T3".  T3 is the active hormone that affects your body.

But sometimes, your tissues do not convert as much T4 into T3. Instead, some of the T4 is converted into "rT3", also known as "reverse T3".  In contrast to T3, rT3 is NOT active.

The rT3 occupies the same binding sites on your cells as active T3 does, thus blocking the active T3 from binding to the cell and thus the cell does not receive instructions to do its work.

It's like musical chairs. You have two hormones, T3 and rT3 competing for one chair. When the music stops, only one of them will be sitting on the chair. The other one will be left out.

The result is symptoms of low thyroid function, even if your typical thyroid test says you are "normal". 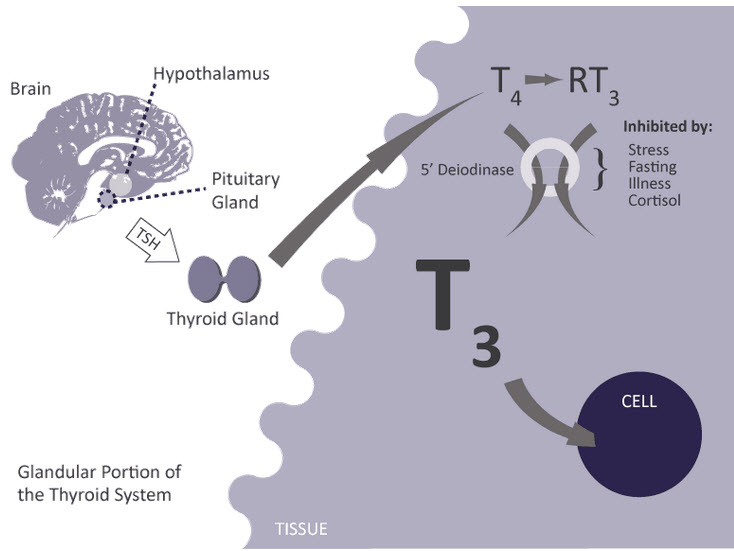 There's very little research on this.  It appears that the role of rT3 is to conserve energy by slowing down your metabolic rate.

A few possible contributors to a rise in rT3 may include:

Women with PCOS Are Sensitive to Stress

Chronic stress -- whether physical or psychological -- appears to play a major role in the increase of rT3.

We all know that many of you are stressed out by inability to conceive, or by PCOS itself.  We also know that medical studies are showing that women with PCOS have a stronger reaction to stress.

So if you have Wilson's Syndrome or something similar, reduction of psychological and physical stress is a necessary step towards solving the problem.

Here's one reason your doctor thinks there is nothing wrong with your thyroid when your test comes back as "normal".

Thyroid hormones are measure by a blood sample.  The blood test reveals the amount of T4 and T3 produced by the thyroid gland.  However, standard tests don't tell us what's going on inside the cells of the body.

For example, about 80% of T3 is produced within cells in the body and it's not clear how much of this is detected in the blood.  Secondly, there is a complex relationship between T4, T2, T3 and rT3 hormones that is not reported in the standard blood test.

In summary, the usual blood tests ordered by your doctor do not provide a complete picture of your thyroid function.

What You Need to Know about PCOS and Thyroid