Do you drink coffee and have PCOS? The coffee bean contains a bunch of natural compounds that affect your body in various ways. 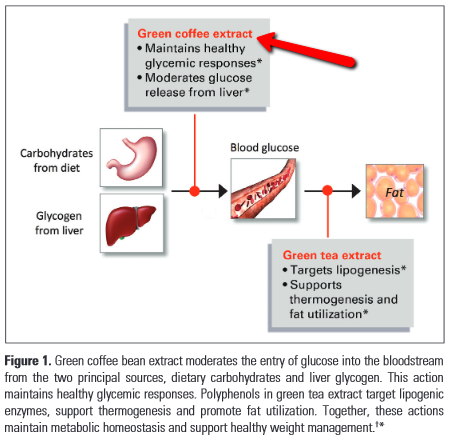 These compounds include caffeine, phenols, diterpenes, trigonelline and minerals such as potassium and magnesium.

However, caffeine intake has also been associated with weight loss, as well as improved circulation and reduced tendency for blood clots.

Other compounds in coffee appear to have beneficial effects. They have antioxidant properties and appear to reduce inflammation and help with blood sugar control.

One of the phenols found in coffee is called chlorogenic acid or CGA. CGA is the second major component in coffee after caffeine.

Green coffee beans can contain as much as 10% of dry weight chlorogenic acids, and coffee is the major source of chlorogenic acids in human diet, although they also occur in fruit and vegetables.

It has been noted for many years that there's an inverse relationship between coffee consumption and diabetes. In other words, drinking coffee reduces the risk of diabetes. Caffeine or the magnesium content of coffee cannot explain this relationship. It is now widely thought that CGA is the ingredient in coffee that is responsible for the protection against diabetes.

CGA -- What Does It Have to Do with PCOS?

Since both diabetes and polycystic ovary syndrome are partially caused by insulin dysfunction and the inability to effectively control blood sugar, could CGA help you get a handle on PCOS?

A considerable number of medical studies are showing that CGA helps the body to more effectively manage blood sugar. As a result, your insulin levels are more likely to normalize, which reduces your tendency to produce the male hormones that give you symptoms like acne, unwanted hair growth or scalp hair loss.

Medical research has shown that CGA is also helpful for reducing:

It also improves your ability to transport blood sugar into cells.

It acts as a strong antioxidant and helps to prevent DNA damage.

In lab animals, it has been shown to help prevent some cancers.

Does CGA Cause You to Lose Weight?

Several research studies of animals have shown the CGA not only retards the absorption of fats from the intestine but also activates fat metabolism in the liver. There is also some evidence that CGA can contribute to moderate weight loss in overweight humans.

An example is a small study of 18 overweight individuals by University of Scranton researchers. The researchers reported that after taking 350 mg of GCA either twice or three times daily for up to 22 weeks, the individuals showed a "significant reductions in weight, BMI (body mass index), percent body fat, and heart rate". The researchers concluded: "GCA should provide an all-natural, lower-cost source as an effective therapy for overweight individuals." Six of the individuals were able to shift their body mass index from the "pre-obese" category to "normal".

Could CGA Help Your Heart?

Although ventricular remodeling is not a "disease", it is abnormal and undesirable.

Could CGA help with this problem? Maybe, if you consider experiments on lab animals.

Tokyo Medical and Dental University in Japan conducted a study of mice. Heart attacks were induced in all the mice. Then one group was given CGA while the other was not. The CGA-treated group had less ventricular remodeling and better heart function. The results in this study also showed less evidence of heart inflammation in the CGA-treated group.

High blood pressure and other cardiovascular problems such as inflammation are problems for a large proportion of women with polycystic ovary syndrome.

Reports from the Nestle Research Center in China and elsewhere indicate that CGA has an anti-hypertensive effect. It appears to lower blood pressure by improving blood vessel function and increasing the ease of blood flow.

Mount Sinai School of Medicine in New York recently was the first to report that a decaffeinated green coffee extract may boost the metabolic processes in the brain.

It's not known whether humans would experience the same effect. But this study shows promise.

However, the type and amount of bacteria in your gut will affect the rate and extent of the breakdown of CGA. Therefore, a healthy bacterial population in your intestines will be helpful. If you've been eating a lot of "convenience foods" or been on antibiotics, we recommend that you take a probiotic formula so that you can repopulate your intestines with beneficial bacteria and get the maximum benefit from CGA.

Homocysteine is a substance that is associated with cardiovascular diseases risk, if it's at a high level. Some women with PCOS already have high levels of homocysteine.

Some studies have shown that people who consume a lot of coffee and black tea have higher homocysteine levels than non-drinkers. It's unknown whether this represents a cardiovascular risk. In any case, you can reduce homocysteine by taking a B-complex vitamin.

If you're taking metformin at a high dosage and for a long time, you may induce a vitamin B12 deficiency. B12 deficiency can cause an increase in homocysteine.