Chromium is an essential trace mineral for women with PCOS.  It is needed for insulin activity in carbohydrate, fat and protein metabolism.  Optimal levels may reduce insulin resistance, improve blood sugar control, and help to reduce the risk of cardiovascular disease and type 2 diabetes.   Supplementation may also help to reduce triglycerides and total cholesterol while improving HDL "good" cholesterol.

In humans, there also seems to be an association between insulin resistance and chromium status. Evidence also suggests that individuals consuming diets with the lowest amounts of chromium tend to have disruptions in glucose and insulin regulation.

Some Women with PCOS Have Glucose Intolerance or Even Diabetes.

Glucose intolerance is a prediabetic condition where you have chronically high blood sugar caused by insulin resistance.  This problem is common in polycystic ovarian syndrome, and can occur where you are lean or overweight. 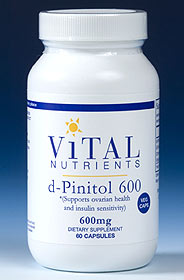 Chromium functions as a part of the insulin signaling system and thus reduces insulin resistance.

This is important because it is thought that insulin resistance contributes to excess male hormone production.  When male hormones are too high, you develop symptoms like hirsutism, acne, or hair loss.

Chromium Could Help with Iron Overload

Several recent studies have shown that women who suffer from polycystic ovary syndrome have trouble keeping their iron levels in balance.  This is referred to as "iron overload".  It appears to be linked to insulin resistance and possibly a hepcidin disorder.  Hepcidin is a hormone that regulates the absorption of iron.

Too much iron can lead to a host of problems, including inflammation and further insulin resistance.

So how does chromium compare to the drug metformin?

Supplemental chromium decreased blood sugar and insulin levels in women with PCOS who were resistance to Clomid therapy, according to one recent study.  In this respect, it was similar to metformin.

However, chromium did not lower male hormone levels like metformin did.  On the other hand, chromium was much better tolerated than metformin.  They were about the same in terms of assisting ovulation and pregnancy rates.

A large number of studies have demonstrated the effectiveness of chromium in decreasing blood sugar and insulin resistance in people who have Type 2 diabetes.

Chromium Could Reduce Acne and Hirsutism

An Iranian study provides some hope if you're having an issue with acne or unwanted hair growth.

Sixty PCOS patients received either 200 mcg. of chromium or a placebo for eight weeks.  Compared to the placebo group, the chromium group had a higher pregnancy rate, and a significant reduction in both acne and hirsutism (hair growth in the wrong places).  Their level of inflammation also went down.

The Department of Pediatrics at Ain-Shams University in Egypt recently published an interesting report.

Their results from studying a group of adolescents with PCOS indicated that chromium supplementation improved menstrual function, reduced the size and numbers of polycystic ovaries, and reduced a marker for testosterone activity (called "free testosterone").

They said: "Supplementation with chromium to adolescents with PCOS is a promising treatment option".

Chromium is well known for its ability at a cellular level to make insulin more effective. In fact, that is the main reason that chromium is included in the d-pinitol formula.

But it's less well known that chromium supplementation may also help you to control your appetite, especially if you crave carbohydrates.

We came across a very interesting report from Louisiana State University about chromium supplementation.  The researchers studied 42 overweight women who had carbohydrate cravings. One group took chromium, the other group took a placebo.

In a study of rats, the researchers also reported that the chromium appeared to have a direct effect on the brain. The brain is where your appetite regulation takes place.

If you consume a "normal" American diet that is high in refined, fabricated foods, you can easily induce a chromium deficiency.  It tends to be lost during the refining process. This is one reason why we only recommend unrefined foods in this diet e-book.