11 Ways PCOS Can Be Helped by L-Carnitine

L-carnitine supplementation may help if you're dealing with any of these PCOS-related issues:


Below on this page, we'll talk about some of these health issues and how they relate to this very interesting nutrient and nutritional supplement.

PCOS Women Found to Be Low in Carnitine 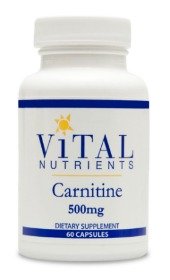 PCOS is like a giant jigsaw puzzle. The more you understand about each piece, the better you can solve your own puzzle. It may be that this nutrient is one of those puzzle pieces.

A medical study from Pamukkale University in Turkey reported that normal-weight women with polycystic ovarian syndrome have carnitine levels in the blood about 50% lower than other women.

There are no other studies that I know of regarding carnitine levels and PCOS. But it's easy to imagine that overweight women with PCOS are also low.

It's not entirely clear why this amino acid may be lower in PCOS women.  But there may be several reasons why you may want to consider supplementation.

A major issue faced by PCOS women is difficulty in getting rid of fat weight.

L-carnitine is necessary to transport fat into the fat-burning compartment of your cells. Thus, people refer to it as a "fat burning" nutrient. Of course, the burned fat is transformed into energy that is used to power your body.

Where does fat get burned? In your muscle cells. Muscle cells depend on adequate levels of this nutrient to efficiently do their job.  It also contributes to better overall fat regulation and reduces insulin resistance problems.

An interesting study examined how it might affect blood flow after eating a high-fat meal. (We don't recommend eating high fat meals because they tend to clog up your circulation and mess up your hormones.) One group of people took supplemental l-carnitine for 3 weeks, the other group took a placebo. As expected, after eating a high fat meal, the blood circulation in the placebo group got worse. In contrast, the circulation in the l-carnitine group actually improved.

Will It Prevent Hair Loss, or Improve Hair Growth?

Male-pattern hair loss of scalp hair is a serious concern for some women with PCOS. A primary reason for hair loss is an excess of male hormones called androgens. This type of hair loss is referred to as androgenic alopecia.

In a recent experiment with human hair at the University of Lubeck in Germany, this nutrient was shown to promote hair growth. Exposure to L-carnitine stimulated hair shaft elongation and reduced hair cell death.

The authors of this study conclude, "Our findings suggest that L-carnitine stimulates human scalp hair growth by up-regulation of proliferation and down-regulation of apoptosis in follicular keratinocytes in vitro".  They further encourage one to explore topical and oral consumption of this amino acid as a "well-tolerated, relatively safe adjuvant treatment in the management of androgenetic alopecia and other forms of hair loss".

By the end of 10 days, both groups showed improvement in their blood sugar levels.

However, only the group taking the carnitine additionally had an improvement in their insulin function. Remember, insulin dysfunction is a root cause of PCOS. If you can reduce or eliminate the root cause, your symptoms will start to disappear.

Helpful for Diabetes, Too

Women with polycystic ovarian syndrome have a very significant increased risk of developing diabetes as well as heart disease.

L-carnitine appears to be beneficial for reducing the impact of diabetes and metabolic syndrome. These disorders have a lot of overlap with PCOS and are associated with insulin resistance and problems with handling blood sugar.

Studies of lab animals with diabetes or metabolic syndrome have shown that this amino acid reduces diabetic tendencies and improves ability to deal with blood sugar fluctuations.

It also reduces a very undesirable metabolic process called "glycation". Glycation is the inappropriate combining of a sugar and a protein in your body, resulting in malfunction of your cells.

It's well known that women with polycystic ovary syndrome have multiple cardiovascular risk factors and an increased prevalence of a type of arterial dysfunction called "endothelial dysfunction".

Endothelial dysfunction means that the cells in your artery walls are not working properly. This condition is an "early warning" sign of future, more serious cardiovascular problems such as atherosclerosis (hardening of the arteries).

A report from the University of Indiana School of Medicine indicates that L-carnitine can reduce endothelial dysfunction in some people, especially if they have a weight problem.

The authors of this study concluded: "Our data suggest that increasing L-carnitine levels may improve FFA-induced and obesity-associated endothelial dysfunction. This improved endothelial function may delay or prevent the development of excess cardiovascular disease."

Another study of rats at the University of Seville was also very interesting. In this study, rats with high blood pressure were given l-carnitine.  It reduced their blood pressure and made their hearts healthier.

Your heart is highly dependent this nutrient.  It has been used for treating angina (chest pain), arrhythmia (irregular heartbeats), congestive heart failure, ischemia (lack of oxygen for heart tissue) and speeding recovery after a heart attack.

It Helps if You Have a Fatty Liver

Fatty liver degeneration is an under-recognized health problem that up to 50% of women with PCOS have.

Fatty liver disease, called NAFLD, is a condition where fat builds up in your liver and clogs up its operations. So what you end up with is a liver that cannot do its job. Your liver is an essential organ. If you liver is not healthy, it's impossibly for you to be healthy, plus it's much more difficult to control health issues associated with PCOS.

Research from Hanyang University School of Medicine in Korea and other research institutions has shown that when liver cells are exposed to carnitine, the toxic effect of fat is reduced, the energy-production capacity of the liver cells is preserved, and liver cell damage is reduced.

The University of Catania in Italy has published a report showing that it was effective in suppressing NASH and improving liver function. The patients in this study took 1 gram of carnitine twice a day for 24 weeks.

It Is an Antioxidant

As fats are burned in the mitochondria, metabolic "sparks" are thrown off, which are called ROS ("reactive oxygen species"). It's like when you have a fire in your fireplace. Sometimes sparks or little hot coals spit out from the fire and burn little holes in your carpet. To prevent this, you put up a fire screen so most of the sparks can't reach the carpet.

A similar situation exists in your cells and tissues. Metabolic fires need to burn efficiently and in a controlled fashion. Even so, some ROS is created, which damages cells and tissues. But your body has its own set of fire screens. They are called "antioxidants".

Carnitine appears to act as an antioxidant; it's part of your metabolic fire screen.