PCOS Changes the Structure of Your Heart

Do you take your heart for granted? Most of us do.

But if you have PCOS, could something be going on in your heart?

We've mentioned several times elsewhere on this site that women with PCOS appear to have an elevated risk of developing atherosclerosis, an inflammatory disease of the arteries.  We used to call this "hardening of the arteries".

So what's new on the heart front?

The University of California at San Francisco has released a report based on the CARDIA (Coronary Artery Risk Development in Young Adults) study.  The San Francisco researchers took echocardiograms of the hearts of four groups of women in their twenties and thirties.  Group 1 had PCOS; group 2 had irregular periods, group 3 had elevated male hormones, and group 4 had none of these issues.

The women with polycystic ovary syndrome had a 10% higher left ventricular mass and a larger left atrial diameter.  The other groups of women did not have this change in their hearts.  The researchers said this is "suggestive of early adverse cardiac remodeling". 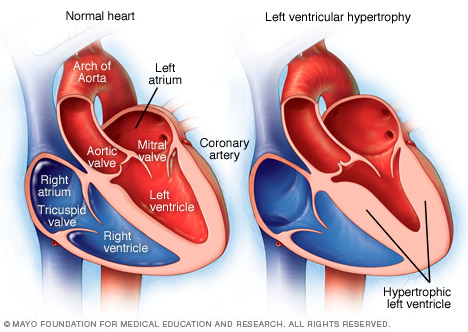 The left ventricle is one of the four chambers in your heart.  It is real workhorse because it is the chamber that pushes the oxygenated blood out of your heart and into circulation.  Your blood can't circulate without the left ventricle.  As this condition develops, it is referred to as "left ventricular hypertrophy" (enlargement).  This is not a disease entity; it is a sign of something happening to your heart.

People with other chronic disorders also have this problem.  In a study from Villa Bianca Hospital in Italy, 23% of diabetics had elevated left ventricular mass regardless of their blood pressure.  The problem was found more frequently in women than in men.  This abnormal heart development seems to be higher in people with PCOS, diabetes, and metabolic syndrome.

When we see a research study like the one from San Francisco, we need to sit up and take notice.  This was a study of young women with PCOS. It was not a study of old folks.

In other words, unless you habitually do serious exercise training, it's not a good sign that your left ventricle is increasing its mass compared to other women of your age.

Aside from being an athlete, an increase in left ventricle mass might be due to the degree of difficulty in circulating your blood.  Maybe it's your weight.  Or high blood pressure, caused by stiff arteries or some other factor.  Or maybe it's certain fats in your diet that contribute to sluggish circulation.  Or some other cause.  I'm not sure.

The bad news is that if left uncorrected, the left ventricle gets progressively stiffer and is less able to circulate your blood.  Eventually, it might develop into congestive heart failure or other heart trouble in your later years.

The good news is that this condition may be reversible, or partly so.

What Can You Do to Prevent a PCOS-Enlarged Heart?

Well, at the very least you can do things to improve your circulation and reduce inflammation, which would include shedding as much abdominal fat as you can, consuming a diet that is anti-inflammatory, and increasing your level of physical activity.  Pretty basic stuff -- but super-important.

An anti-inflammatory diet is heavy in plant foods, especially vegetables, selective in fats, and devoid of most processed, fabricated foods.  More details about this are in The Natural Diet Solution for PCOS e-book.

Or, if you're into taking drugs, ask your doctor about metformin.  A few studies suggest it reduces ventricular hypertrophy in rats and mice.  (Note: in one study of women with PCOS, the nutritional supplement called NAC was as effective as metformin for relieving symptoms.  So if you don't like metformin, consider a NAC supplement.

Birth control pills do not build cardiovascular health.  Some formulations may cause blood clotting in some individuals.

Something else to consider is vitamin D, since a lot of women who have polycystic ovarian syndrome are low in vitamin D.

Semmelweis University in Hungary reported an interesting study of rats.  A group of female rats was given dihydrotestosterone (DHT) over a span of ten weeks to simulate PCOS.  The rats showed undesirable structural changes in their blood vessels.

Another group of female rats was given vitamin D3 along with DHT.  The vitamin D3 appeared to neutralize most of the adverse effects of the DHT.

Other studies have shown that vitamin D adequacy is associated with reduced risk of cardiovascular disease and other health problems.

This is one reason why there is so much vitamin D in the d-pinitol formula.