An Unknown Way Berberine Could Help with IVF -- and PCOS!

If you have issues with infertility or miscarriage, could berberine extract help you to become pregnant and have a successful pregnancy, especially if you're considering "assisted reproduction"?

An interesting study from Harbin Medical University in China might shed some light on this question.  They studied 150 infertile women with PCOS who were undergoing IVF (in-vitro fertilization).  The women were divided into 3 groups: one group received berberine extract, another received metformin and the third group received a placebo tablet.  Each group started their program 3 months before the IVF procedure.

Both the berberine and metformin groups had improvements in their testosterone and insulin levels, and had a higher pregnancy rate than the placebo group.  Compared to metformin, the berberine group had greater weight reduction and achieved more live births with fewer side effects than metformin.

So why would this extract have such a beneficial effect?   There are a number of mechanisms of action.  But an interesting one is "MicroRNA".

MicroRNA is a large family of small RNA molecules discovered in 1993 that regulate the behavior of at least 5,000 genes.  (RNA, called ribonucleic acid, is present in all living cells.)

Recent research is showing that microRNA is involved in numerous physiological cellular processes, including regulation of ovarian function, maturation of eggs, ovarian follicle development, fetal growth, formation of the placenta, ovulation and much more.  MicroRNA also regulates hormone production and action, such as progesterone and androgens (male hormones).

It's estimated that more than 200 microRNAs are involved in the development of an egg at the very earliest stages.  One of the more important ones seems to be microRNA-21.  It appears that berberine extract increases the expression of microRNA-21 in eggs or fluid surrounding eggs.  This could at least partially explain why this extract appears to be helpful for maintaining growth of an egg at the very early stages.

The graph below shows the effect of berberine on early-stage mouse embryos.  Notice that mice embryos exposed to berberine (the gray bars) were more likely to develop than those not exposed to it (black bars). 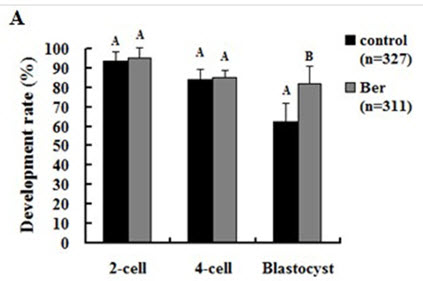 If you're curious about other benefits of berberine extract, click here.

In general, it appears that this extract works at a deep level to improve many aspects of PCOS, including improved chances of a pregnancy.

You can get lab-tested, highest quality berberine extract here.