PCOS and recurrent miscarriage, finally got my bundle of joy! don't give up :) 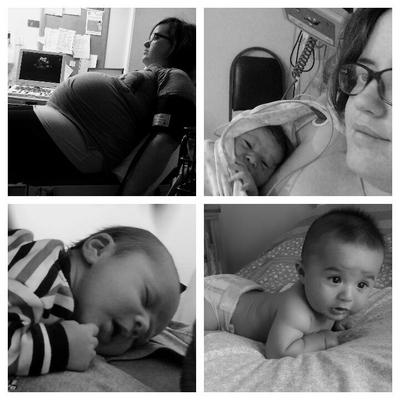 Hey ladies this is not going to be a short story by any means;)

In Jan 2006 at the age of 16 I was diagnosed with PCOS after unexplained weight gain lack of regular periods underdeveloped breasts and facial hair .

My GP was very sensitive and amazingly informative at this stage of my life (16). I was started on the pill Dianettr but switched to Marvelon which are both supposed to be anti-androgynous or whatever the term is (he-he).

So after 5 years of teenage life I found myself with severe stomach pain in Jan 2011 and bleeding. To my ultimate surprise my partner of two years and I were told we were expecting a baby. This was unplanned as I was still on Marvelon but totally overjoyed as I was very aware of fertility outlook.

However this was short lived as I entered the world of gynae and obstetrics with HCGs, ultrasound, early pregnancy clinic -- I was told this was a miscarriage and my HCGs were not going up or down. Quite the mystery to the docs. I was scared frightened and in awful pain. I was appros pregnant at this stage and decided to let it pass myself naturally. This took until March 2011.

I started university in the Sept of that year for my nursing degree. Happy but still sorrowful and depressed at maybe never having a successful pregnancy.

I gained weight and became depressed for about a year and then finally gave myself a good kick up the bum ;).

Entering NY final year of uni, myself (24) and my partner (29) decided to try are to conceive within the year. I lost 2 stone in weight, leaving me at a ukpecialistceived very fast falling pregnant in Feb 13 and April 13, both resulting in miscarriage.

I cried and cried for progesterone treatment until I was referred to consultant who prescribed straight away and I was taking vitex 1600 mg for two months. Had a positive pregnancy test 2 August 2013 and I am now a mum to the most adorable 6 month old baby boy, Noah.

PLEASE DONT GIVE UP IT IS ALL WORTH IT IN THE END.

MUCH LOVE ANNEMARIE, AND BABY NOAH