What Types of Ovarian Cysts Could You Have?

There are at least five types of cysts that you could have. Here's a description of each one.

The most common type of ovarian cyst is the functional cyst, also called a physiologic cyst. "Physiologic" means the cyst is non-pathogenic.

It develops from tissue that changes during the process of ovulation. Your ovaries normally grow cystic structures called follicles each month.

Typically, these resolve back to normal ovarian tissue after ovulation. But sometimes there is a glitch and the fluid-filled cyst stays on for a while. 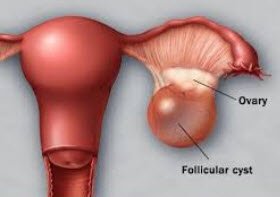 The pituitary gland in your brain sends a message, by increasing luteinizing hormone (LH), to the follicle holding the ripening egg. This is called a LH surge?.

Normally, the egg is released from the follicle and starts down the fallopian tube where it may then become fertilized by a sperm cell.

If the LH surge does not occur, the follicle doesn't rupture or release its egg.

Instead, it grows until it becomes a cyst. These cysts seldom cause pain, are usually harmless, and may disappear within two or three menstrual cycles.

When there is a successful LH surge and the egg is released, the follicle responds by becoming a new, temporarily little secretory gland called the corpus luteum. The corpus luteum produces large amounts of progesterone and a little bit of estrogen, to prepare the uterus for conception.

But occasionally, after the egg is released, the escape hatch seals off prematurely and tissue accumulates inside, causing the corpus luteum to enlarge.

This type of cyst will usually disappear after a few weeks. Rarely, a corpus luteum cyst can grow to 3"-4" in diameter and potentially bleed into itself, or twist your ovary, thus causing pelvic or abdominal pain.

A dermoid cyst is mainly fat but can also contain a mix of different tissues. They are commonly small and usually don't cause symptoms. Very rarely, they become large and rupture, causing bleeding into the abdomen, which is a medical emergency.

These are cysts that form when endometrial tissue (the type that lines the inside of the uterus) invades an ovary. It is responsive to monthly hormonal changes, which causes the cyst to fill with blood.

It's called a chocolate cyst because the blood is a dark, reddish-brown color.

Multiple endometriomas are found in women who have endometriosis. Although often asymptomatic, chocolate cysts can be painful, especially during your period or during intercourse.

Cystadenomas are cysts that develop from cells on the surface of your ovary. They are usually benign. Occasionally, they can become quite large and thus interfere with abdominal organs and cause pain.

Women who don't ovulate on a regular basis can develop multiple cysts.

The ovaries are often enlarged and contain many small cysts clustered under a thickened, outer capsule.

There are many factors causing a woman to not ovulate and develop polycystic ovaries. PCOS (polycystic ovary syndrome) is a prime reason for the formation of multiple cysts. PCOS is a complex condition that involves multiple hormonal and organ system dysfunction. Multiple ovarian cysts are just one facet of this disorder.