Is PCOS Linked to Ovarian Cancer?

There's no clear link between ovarian cancer and PCOS. However, ovarian cancer is usually not diagnosed until after it has spread and is difficult to cure. It is commonly thought that ovarian cancer has few if any symptoms prior to reaching and advanced stage.

A recent study conducted by Kaiser Permanente has shown that women who developed ovarian cancer were more likely to complain of abdominal or gastrointestinal symptoms up to one year before diagnosis.

There are many possible reasons for abdominal or pelvic discomfort or pain. Although not likely, it could be ovarian cancer. In any case, if you have chronic abdominal or pelvic problems, be sure to consult with your physician without delay to determine its cause.

What Is Ovarian Cancer, and What Causes It? 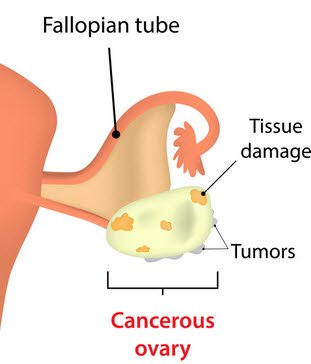 Ovarian cancer is a malignant tumor (abnormal growth) located in the ovaries. It typically spreads to nearby lymph nodes and eventually other tissues.

Although it is relatively uncommon, it is the 5th leading cause of cancer death in women. One of every seventy women will develop this cancer during her lifetime. It is the leading cause of death from gynecologic cancers. About 25,000 women in the US are diagnosed each year. About 14,000 die each year from the disease. Ovarian cancer can occur in adult women of any age, although women over age 60 have the highest risk.

Its cause is unknown. Only about 5% of ovarian cancer cases are related to an inherited gene, the BRCA gene.

What are the Risk Factors?

Several risk factors have been identified. If you have any of these risk factors, it does not necessarily mean that you will get ovarian cancer. It only means you are more likely than the average woman to develop it.

Age. Ovarian cancer usually develops after menopause. Women over age 60 have the highest risk. However, it is not confined to older women; one quarter of ovarian cancer deaths occur in women 35 - 54 years of age.

Family history. If a close blood relative of yours (mother, sister, daughter) has had ovarian cancer, your risk is higher.

Infertility and childbearing status. Women are at increased risk if they've had difficulty conceiving, had children late in life, have never been pregnant, or have never used birth control pills.

Fertility drugs. In some studies, researchers have found that prolonged use of the fertility drug clomiphene citrate, especially without achieving pregnancy, may increase the risk for developing ovarian tumors. If you are taking this drug, you should discuss its potential risks with your doctor. However, infertility also increases the risk of ovarian cancer, even without use of fertility drugs.

Here are 8 conditions identified as risk factors identified in a recent study by Brigham and Women's Hospital in Boston: Jewish ethnicity, less than 1 year of oral contraceptive use, never given birth, no breastfeeding, no tubal ligation, painful periods or endometriosis, PCOS or obesity, and talc use.

Signs and Symptoms of Ovarian Cancer

In its early stages, it is a silent disease that produces few if any obvious and significant symptoms. For this reason, an annual gynecological exam is crucial to your good health. An exam provides your doctor the opportunity to feel for tenderness or masses in your pelvis.

But as the disease progresses, one or more of the following symptoms may appear:

If you have any of the above symptoms, consult with your physician without delay.

Although many of these symptoms can be associated with other health problems, they can also be suggestive of a possible cancer process.

How is Ovarian Cancer Diagnosed?

By the time it is diagnosed, the tumor has too often spread beyond the ovaries into adjacent tissue and organs. Over 50% of women with ovarian cancer are diagnosed in the advanced stages of the disease. This is less likely to be the case for a woman who has regular gynecological exams. A physician should assess any ovarian mass in a postmenopausal woman, or any ovarian mass in a pre-menopausal woman that is unchanged for six weeks.

There is presently no standardized screening test to accurately detect ovarian cancer. It is usually diagnosed by the following methods:

Pelvic examination. A pelvic exam includes a visual and manual examination of your vagina, rectum and lower abdomen to detect any possibly cancerous masses.

Ultrasound. If the pelvic exam suggests a growth on your ovary, an ultrasound test may be conducted to create an image of your ovaries. This image may show your doctor if your ovary has an appearance that is common for a cancerous tumor. Although an ultrasound can’t tell for sure if a tissue is cancerous, it will provide necessary information to your physician for determining the next step in your diagnosis.

CA 125 blood test. This test is used mainly to check for the recurrence of cancer in women who have already had ovarian cancer. CA 125 is a protein found in abnormally high levels in the blood of people who have cancer, and in certain non-cancerous conditions. However, some women with ovarian cancer can have normal CA 125 levels. This test is not specifically diagnostic for ovarian cancer.

Biopsy. The only certain way to determine if an ovarian mass is cancerous is to do a biopsy. This means surgery to remove a tissue sample. A medical pathologist will look at the sample under a microscope to see if it is normal or cancerous. In some cases, a physician may prefer to not take a biopsy, because the biopsy may release potential cancer cells into adjacent tissues. Instead, they may recommend removal of the entire ovary.

Surgery is the preferred treatment and is usually necessary for diagnosis. If the cancer is discovered early, it may be possible to remove only the affected ovary and its fallopian tube, thus saving the other ovary for the possibility of a future pregnancy. However, in most cases, the cancer is progressing on both sides, necessitating removal of both ovaries, and possibly the fallopian tubes, uterus, nearby lymph glands, and any other involved tissue.

Several types of chemotherapy are commonly used after surgery. Radiation may also be recommended in some situations.

Is There a Link Between PCOS and Ovarian Cancer?

What Do PCOS and This Cancer Have in Common?

It now appears that both PCOS and ovarian cancer are driven, in part, by the same dietary habits: eating lots of refined carbohydrates. A study of 2,411 Italian women was published in the January 2003 issue of Annals of Oncology. This study showed a direct association between the incidence of ovarian cancer  and the total glycemic load of the diet.

Simply put, those women who ate the highest amount of carbohydrate, and who ate carbohydrates with the highest glycemic index, were most likely to get ovarian cancer. Similarly, carbohydrate excess contributes to PCOS. (The "glycemic index" is a ranking of foods based on their ability to raise blood sugar levels).

Another recent study showed a direct and strong association between IGF-1 and ovarian cancer in women who were under 55 years old. This study is relevant to you because earlier studies have indicated that women with PCOS are likely to have elevated levels of IGF-1. Therefore, because most PCOS women are younger than 55 and may have high levels of IGF-1, they have an increased risk of developing ovarian cancer.

Ovarian cancer is seldom diagnosed until it's fairly advanced, and your odds of survival are not high. So it's wise to be proactive in reducing your risk.

Ovarian cancer is not easy to prevent, yet there are some things you can do: