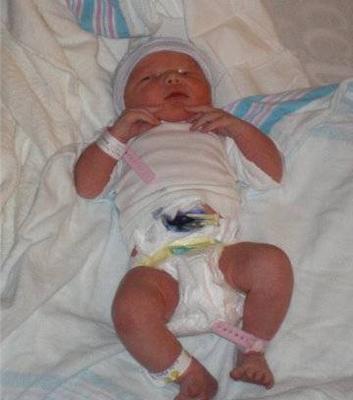 (Summary: After realizing she had PCOS, Bonnie used natural treatments to restore her cycle and have a successful pregnancy. She describes what she did and shows a photo of her baby).

I had my first period at 9-years-old. For the next 10 years, my cycles were very irregular. It would be months between periods, and when I did have a period, it was pretty painful. My weight fluctuated greatly during those years, and I topped out at around 270 pounds. Before I got married at age 19, I decided to lose some weight. I was probably about 180 pounds when I got married, but I started gaining again after the wedding. I unexpectedly got pregnant about two months into the marriage but had a miscarriage at 10 weeks.

At that point I began researching my condition and found out about PCOS. I had all the classic symptoms, so I started implementing some of the natural "treatments" I read about others doing. Here is what I did:

Diet:
-Switched from regular to organic milk, and consumed milk only when eating cereal
-Cut out soft drinks
-Drastically reduced the processed sugar in my diet

I immediately began having normal cycles that lasted 33 days each. The pain during my period almost completely went away. I began losing weight slowly, but at a maintainable rate. A few months in, I monitored my BBT, cervical mucus and cervical position and took note of a successful ovulation. I got pregnant (continued using progesterone through the first trimester) and 9 months later gave birth to my 7 lbs 12 oz daughter. She is now 6 months old, and I am striving to become healthier and healthier.
PCOS can be overcome - I am convinced of that. So many women are unsure about what their doctors tell them to do - such as take birth control to regulate cycles -- and I think that "unsureness" is well-founded. The natural approach is ALWAYS best to do first because it is the least risky. And from my story and others, I would say the natural approach is also more successful and certainly less emotionally taxing.