Among women with PCOS, there's a lot of talk - and confusion - about "natural" vs. "synthetic" hormones. We don't use this classification because it doesn't clarify the important issue.

Instead, we place all hormones into two basic categories: "native" and "foreign". 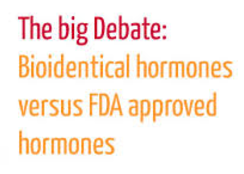 A native hormone is a hormone that your body produces, i.e., it is "native" to your body. However, a number of native hormones can be created in the laboratory. They are structurally and biochemically IDENTICAL to the hormone you produce in your body.

A foreign hormone is a chemical compound that is not naturally found in your body. Foreign hormones are structurally and biochemically distinct from the native hormones that they seek to imitate.

So which hormone should you take - a native hormone or a foreign one?

Common sense would suggest that taking a native hormone is healthier for you than taking a foreign hormone.

But as a practical matter, the pharmaceutical industry, the FDA, and all of the medical authorities will steer you in the direction of foreign hormones. There are several reasons.

First, you will be told there are no definitive studies to prove that native hormones are effective. The reason there have been no large-scale studies is that they cost a lot of money.

Second, pharmaceuticals won't fund studies or market native hormones because there's no money in it, when compared to the patented foreign hormones they sell now.

Third, physicians are not taught about native hormone therapy in medical school. Once they get into practice, many are simply too busy to do their own research. Therefore they find themselves relying on information provided to them by pharmaceutical companies. Most medical doctors are largely ignorant about and inexperienced with the use of native hormones.

Fourth, some physicians want to avoid the possibility of malpractice suits, which is understandable. One way to reduce malpractice exposure is to avoid anything unconventional. It is definitely unconventional to prescribe a hormone that is identical to the ones in your body. It is entirely conventional and common to prescribe foreign hormones specifically approved by the FDA and marketed by pharmaceutical companies.