The Glycemic Index and PCOS

The Glycemic Index is relevant for women who have PCOS (polycystic ovary syndrome).

Chronically high insulin is a problem for women with PCOS, because insulin profoundly alters overall hormone balance, and causes your metabolism to go awry. For example, hyperinsulinism (excessive insulin) contributes to obesity, diabetes, heart disease, and some cancers. A requirement for controlling polycystic ovarian syndrome is to dampen your insulin response after food or drink is consumed

Why the Glycemic Index Is So Important

As you can see in the diagram below, a high glycemic diet (see the green box) causes a huge chain of events that really mess up your body.

It's super-important that you read this entire article. 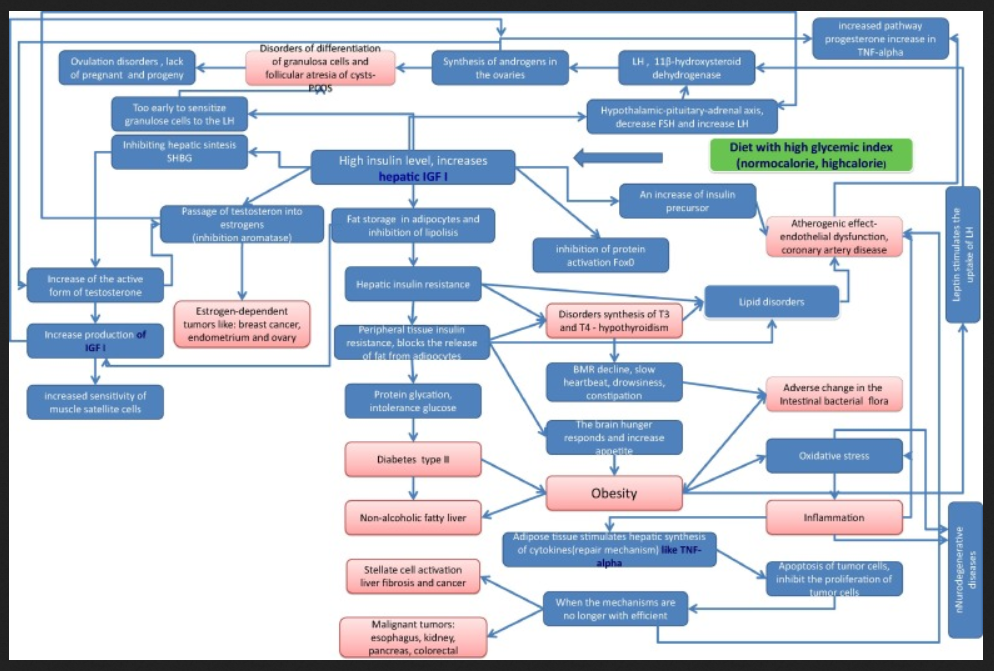 You can control your insulin to a great extent by avoiding upward spikes in your blood sugar from eating the wrong kinds of food.

From here on, things get pretty complex.  Get a beverage of your choice, and sit down to give this information some careful study.  If you can understand and implement the Glycemic Index concept, you will go a long way towards relieving many of the problems associated with polycystic ovarian syndrome (PCOS).

If you have our PCOS Diet e-book, refer to chapter 4.2, which explains everything on this page.

In contrast, a simple carbohydrate:

Humans have been consuming unrefined complex carbohydrates for hundreds of thousands of years with no apparent ill effects. But as soon as we started refining and processing natural, complex carbohydrates into fabricated convenience foods, the rates of chronic disease began to increase dramatically. A large number of studies have shown a correlation between consumption of refined carbohydrates and chronic health disorders, including polycystic ovary syndrome.

What Is the Glycemic Index?

Recent research has revealed another very important distinction among carbohydrates: the ability of different carbohydrates to increase your blood sugar level.

The glycemic index is a list of foods that are ranked by the influence they have on your blood sugar level. Pure glucose is used as the reference food, and its index value is set to 100. All other foods are compared to glucose, and ranked accordingly.

White bread has been used as the reference instead of glucose in some tests, which yields different index values. However, the relative ranking of the foods remains the same. In our discussion, we use glucose as the reference value.

Take a look at the table below. Columns 1 and 2 list the food and its glycemic index. (Don't worry about the last 3 columns. We'll explain them in a moment.)

Legend for Table Below

Notes: (1) The asterisk indicates that the glycemic index value is the mean value of more than one study. (2) Serving size is in grams. 100 grams = nearly ¼ of a pound. (3) "GI" is an abbreviation for Glycemic Index.

As you look at the first two columns, there are several things worth noting.

To see a much more complete list of the glycemic index for foods, we suggest that you read The New Glucose Revolution, by Jennie Brand-Miller and Thomas Wolever.  You can also see a list of 100 foods from Harvard Health Publications.

OK. Now that we're familiar with the glycemic index for our list of selected foods, let's move on to columns 3 and 4 in the table: "nominal serving size", and "available carbohydrate per serving".

The "nominal serving size" refers to the amount of food, in grams, that was used during the test to determine the glycemic index for that food. For example, in the studies for mashed potatoes, people consumed 150 grams, which produced a glycemic response of 92, which is only slightly below the reference food, which is pure glucose (GI = 100),

So if you're interested in knowing how much of a food was consumed to produce the glycemic response in the test, the "serving size" column in a food table will tell you.

Now let's turn our attention to column 4 in the above table, "available carbohydrate".

When the glycemic index study is conducted for a specific food, ten people consume 50 grams of "available carbohydrate". This is the standard amount for all foods. It allows a direct comparison between different types of foods, such as corn flakes vs. an apple. All we care about for glycemic control purposes is the amount of "available carbohydrate" that can actually raise your blood sugar.

What do we mean when we say "available carbohydrate", as shown in column 4 of our food table?

The carbohydrate in any food consists to two types: digestible and indigestible. The digestible part is "available" to be absorbed into your body to provide energy. The indigestible is called "fiber", and is excreted.

In other words, it's helpful to know how much of the carbohydrate that you're eating will be digested, because the indigestible part will not increase your blood sugar. In fact, certain kinds of fiber will actually help you slow down the absorption of digestible carbohydrates, and thus avoid spikes in blood sugar and insulin.

So what's the take-away from this knowledge? By using the glycemic index table as a guide, you can actually eat a larger quantity (by weight) of carbohydrate foods while exposing yourself to fewer carbohydrates that can increase your blood sugar.

So far, so good…..the last column in our glycemic index table is a listing of the "glycemic load" for each food.

The "glycemic load" is an index number you get when you multiply the glycemic index and "available" carbohydrate in a serving of food, and then divide by 100.

Remember that the glycemic index value for a food only tells you how quickly the available carbohydrate is converted into blood sugar. You can think of the index in column 2 as indicating the glycemic "quality" of the food.

The "available carbohydrate" number in column 4 tells you the "quantity" of potential glycemic increase.

The glycemic load in column 5 takes into account both the "quality" and the "quantity" of the carbohydrate food you are eating.

Take carrots, for example. According to our table, the glycemic index for carrots is 47. The available carbohydrate in 80 grams of carrots is 6 grams. (One medium carrot weighs about 80 grams.)

So let's calculate the glycemic load of eating a medium carrot:

If you check our table for the glycemic load for carrots, you'll see that it is 3. To summarize, here's the relevant data for our medium carrot:

But what would happen if you had ten servings of carrots, instead of just one? Your glycemic index would remain the same at 47. However, the glycemic load would increase from 6 to 60.

The reasons your glycemic load increased is that you are eating more servings. Of course, that's no problem with carrots. It's unlikely you would want to eat ten carrots at one sitting! After eating five or six, you would probably lose your appetite altogether. By the way, that's a big advantage of low glycemic index foods: they fill you up before you can eat too many "available" carbohydrates.

On the other hand, it's a different story with French fries:

So you have the worst of both worlds. The quality is poor, and the quantity is high. Worst of all, French fries taste good! It's tempting to have a few extra fries, instead of a serving of carrots.

A serving of fries is listed in our table at 150 grams, or about 1/3 pound. If you get the "hungrys" and have an extra serving, you would double your glycemic load from 22 to 44. Although French fries are clearly bad for you because they contain altered fats, how bad is it when you double your glycemic load to 44 by having that second serving of fries?

Whether a glycemic load of 44 is "too much" depends on the amount of other carbohydrate you're consuming throughout the day, your activity level, and your body size. Fries and a Big Mac would have a higher total glycemic load than fries and a salad. If you are a large person who is physically active, a higher glycemic load may be OK. But regardless of the glycemic load, French fries are not good for you!

Women with PCOS are very likely to have insulin resistance and blood sugar abnormalities. Therefore, we recommend that you be cautious about the total glycemic load in any one meal.

Don't forget – the rise in your blood sugar depends on both the quality (glycemic index) and the quantity (glycemic load) of carbohydrate in your meal.

Other Tips for Lowering Your Glycemic Index

Extensive cooking causes the starch fibers to break down, thus making them easier and faster to digest. This is especially true for starchy foods like grains.

By "whole", we mean the hull or skin is still attached. This fibrous coat slows down the assimilation of the carbohydrates inside. An obvious example is brown vs. white rice. Brown rice is still encased in its hull.

Small particle sizes are more quickly digested and absorbed. When you look at any glycemic index table, you'll notice that bread made with white flour has a value of 73 while bread made with whole wheat flour has an index value of 71, nearly the same. You would think that whole wheat bread would be have a much lower glycemic value because it has a lot more fiber. However, the fine milling nullifies the anti-glycemic effect of this fiber.

4. The type of fiber in the carbohydrate is important.