Hormone Replacement Bombshell -- Should You Be Concerned?

As you may have heard some time ago, the National Institute of Health prematurely ended a large hormone replacement therapy (HRT) study. The study, called the Women's Health Initiative (WHI), was initiated in 1993 and scheduled to conclude in 2005. It is the first and only large study to compare the effects of hormone replacement therapy vs. placebos in 16,000 healthy women. 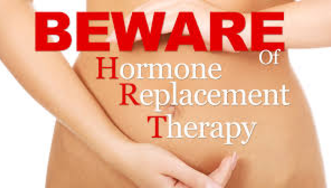 After reviewing the data collected thus far, the researchers realized that the women who had been on HRT longer than five years developed a small but significant increase in invasive breast cancer, heart attacks, strokes and blood clots as compared to the women on placebo. Therefore, they stopped the study because, on balance, the HRT was not benefiting the long-term health of the study participants, even though it relieved menopausal symptoms in many cases.

The results of this study have relevance for women with PCOS because many are taking birth control pills on a long-term basis, in an effort to have regular monthly cycles of bleeding. Birth control pills are a form of hormone replacement therapy (HRT). Birth control pills are similar to the medication (Prempro) used in the WHI study in that they both contain an estrogen derivative and a progesterone derivative. Although the two products are certainly not identical, they have similarities.

Even though the WHI was studying menopausal women on HRT, all women who are on long-term HRT should take notice. Until there is a similar long-term study of large numbers of younger women taking the compounds found in birth control pills, and comparing them to matched controls taking a placebo, common sense dictates we carefully assess the risks and benefits of any hormone treatment. We also need to consider other therapies that may achieve similar results without using hormones at all.

Apparently, the problem was Prempro, the medication used in the WHI study. It's commonly prescribed for the relief of menopausal symptoms, and for prevention of osteoporosis and heart disease in women. Of course, you're probably not taking Prempro or a similar product for these problems. But read on and to see how Prempro may be relevant to you.

Prempro is a combination of conjugated estrogens (Premarin) and medroxyprogesterone (Provera).

Premarin is a combination of human and horse estrogens. "Estrogen" is a term used to describe a family of three related hormones found in your body: estriol, estrone, and estradiol. Premarin is predominantly estrone and a smaller amount of estradiol. It has no estriol.

Premarin also contains a horse estrogen called equilin. This horse estrogen is extracted from the urine of pregnant mares. Horse estrogen does not naturally exsit in the human body, although it has a powerful estrogen-like effect.

Therefore, a woman might raise two questions about Premarin. First, why is estriol not included? Estriol is one of three essential estrogens in the human body. Medical studies indicate estriol reduces symptoms of menopause, and may have a cancer- preventive effect as well as other health benefits.(2,3) With Premarin, you end up receiving an unbalanced ratio of estrogens.

Second, what are the consequences of introducing a horse estrogen into your body? Horse estrogens are structurally different from human estrogens; your body is not able to metabolize a horse estrogen the same way a horse does. Therefore, metabolic problems, i.e., "side effects", are the probable result.

Progestins are associated with side effects so unpleasant that some women simply quit taking their prescriptions. On the other hand, progesterone, taken appropriately, has an excellent compliance record, in large part because of the minimal side effects.

Another question a woman might ask is this: Why should I take a synthetic, artificial substance like medroxyprogesterone? Why not take progesterone itself? We'll answer these questions later in this newsletter.

Bottom Line: First of all, Prempro has a number of possible side effects, including headache, irritability, restlessness, mood changes, nausea, increase in uterine fibroids, changes in vaginal bleeding, weight changes, changes in sleep patterns, fatigue, upset stomach, bloating, acne, breast tenderness, and changes in sex drive. Secondly, according to the WHI study, a woman is ultimately better off taking a placebo than Prempro. That's why they ended the study.

So what, then, is the compelling reason to take Prempro or similar products on a long-term basis?