Do you ever find yourself eating more than you think you should, or need? Plus, it's really hard to control weight and other symptoms of PCOS?

We tend to think maybe it's because of consuming too many calories, eating too much fat, too many carbs, large portion size, or whatever. But what about vegetable oil?

We've been told by health authorities and food corporations that vegetable oils are healthier substitutes for saturated fats like butter and lard. Is this really true?

Vegetable oils have a number of very serious flaws. We'll discuss one of these flaws below.

But first, have you ever smoked some pot and before you knew it, you wanted something to eat?

So when you smoke some pot, you're altering your appetite, plus affecting your body in all kinds of ways that are below your awareness.

What Do Marijuana and Mayonnaise Have in Common?

OK, back to vegetable oils.

When certain fats are consumed, your endocannaboid system is activated, which triggers you to eat more food than you actually need. The result is your middle gets bigger.

The kind of fat we're concerned about here is called "linoleic acid" (LA), which is one of the omega-6 fats. 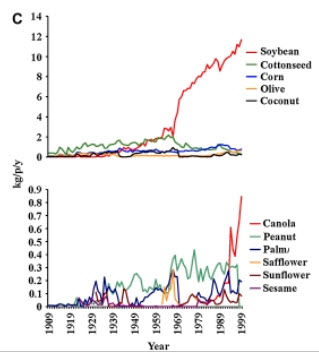 Well, so what? The problem is that soybean oil is 50% linoleic acid (LA). In the body, a lot of linoleic acid is converted into arachidonic acid (AA).

And AA is the basic component of two prominent endocannabinoids, which stimulate your endocannabinoid system. This has the effect of causing you to gain weight. The mice shown below are an example (apologies for the disgusting photos). Notice that the mice in photos B and E have a lot more belly fat than the others. 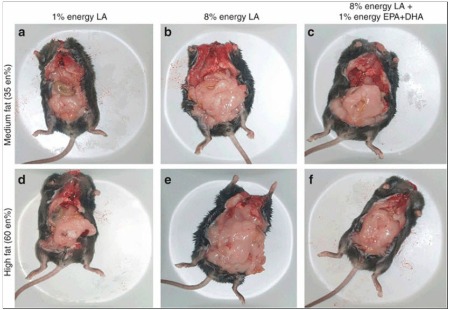 The above photo is provided in a study conducted by the National Institute of Nutrition and Seafood Research in Norway. In a careful set of experiments, they showed that increased consumption of LA in mice caused them to be fatter, regardless of whether they were on a high-fat or medium-fat diet.

In the above photo, mice A, B and C were on a medium-fat diet (35% of calories from fat). The diet of mouse A was 1% linoleic acid (LA). The diet of mouse B was 8% LA. You can see that mouse B, who consumed more LA, had much more belly fat than mouse A.

In the mice fed a high-fat diet (60% of calories from fat), the results were similar. Mouse E (8% LA diet) is much heavier than mouse D (1% LA diet). Notice that mice D and E consumed the SAME total amount of fat. This suggests that the total amount of fat in your diet is less important than what the fat consists of. In this case, the higher amount of LA relative to other fats was the primary cause of increased obesity in mouse E.

In addition, the mice consuming the 8% LA diet had an increase in leptin and a decrease in adiponectin, which is a disordered hormone pattern seen in PCOS.

What's interesting is that the experiment mimicked the estimated level of human LA consumption in the early 20th century (mice A and D) compared to the end of the century (mice B and E).

But wait a sec. We've left something out. What about mice C and F? In these mice, 1% of their calories came from EPA and DHA, which are two fats found in marine creatures such as fish and krill. Notice that even though mice C and F consumed the same obesity-inducing 8% LA diet as mice B and E, they were much less obese. That's because the seafood-based oils tended to neutralize the effect of the 8% LA diet.

Control PCOS and Weight by Changing Your Oils

What to do? Here's the bottom line:

1) Calm your endocannabinoid system by reducing soybean oil consumption to 1% of your total dietary calories. (Reduce marijuana too). Doing so helps your control appetite and reduces your inclination to gain belly fat. Why not take this 45-day challenge and see what happens to your waistline: Don't consume more than 1% of your dietary calories in the form of soybean oil.

2) Consuming more marine products such as fish or fish oil helps to neutralize the effects of too much soybean oil and other sources of LA. In conjunction with reducing soybean oil, you may find that supplementation with a fish oil concentrate will be helpful, and should improve your results with your 45-day challenge.

3) It's not the percentage of fat in your diet that is causing you problems. It's the TYPE of fats you're consuming. So don't be fooled by all the low-fat and no-fat hype from the food manufacturers.

Some LA is essential for health, but not in the gigantic quantities we're consuming today. In excess, it is harmful in a multitude of ways.

4) Be very moderate with use of bottled vegetable oils. Swapping out soybean oil for some other vegetable oil won't solve the problem because they all contain significant amounts of linoleic acid (LA).

One final notethere are additional nuances about the types and proportions of fat in a healthy diet. In this article, we're only looking at a piece of a big puzzle.

What's a Good Diet?
Why You Should Avoid Convenience Foods
Which Carbs Are Best?
The Dangers of GMO Foods
GMO Foods Article Stirs Controversy
The Benefits of Juicing
The Eat Right for Your Type Diet
You Need Antioxidants
What Do Pot and Fatty Foods Have in Common?
Like Bread? Than Have Berries Too!
Hidden Threat to Ovarian Health Found in Foods
Is Food-Based Lipotoxicity a Cause of Polycystic Syndrome?
Do Avocadoes Help You Lose Weight?

This free newsletter gives you original and immediately usable information to help you deal with PCOS.

Get the latest research, tips for improving your health, answers to questions, success stories, and more!

Your e-mail address is totally secure. We will never misuse your information.

Enter Your Email Above to Subscribe Today
and Get Your Questions Answered in this Free Special Report!

d-Pinitol
may be relevant to PCOS